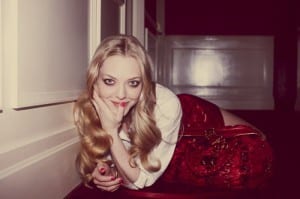 The actress talks about filming the sex scenes of “Lovelace”

Amanda Seyfried is shedding her “good girl” image with her latest movie “Lovelace.” But she said the movie’s sex scenes didn’t pose a problem for her.

“There’s nothing scary about the sex scenes,” Seyfried said. “There’s no consequences. It’s very safe – especially with Peter [Sarsgaard]. I trust him, he’s a good pal and a great co-star.”

But there is one person Amanda Seyfried doesn’t want seeing her naked.

“I don’t want my dad to see my naked body ever,” she told reporters. “I’m going to sit through [the screening] tonight and cover his eyes. It’s really only the nudity. I don’t have problems with him seeing me in violent situations. In sexual situations, it’s a little tough, but it’s more just the nudity. I think anybody can relate to that.”

And Lovelace had to deal with a lot more than just having sex for a living. She was also severely abused by her first husband, Chuck Traynor. Amanda Seyfried said that the violence was the worst part of filming for her.

“It’s not that I was afraid of being hurt or anything like that,” Seyfried said. “I was afraid of where it would take me because we’re depicting something that was really happening to this woman.”