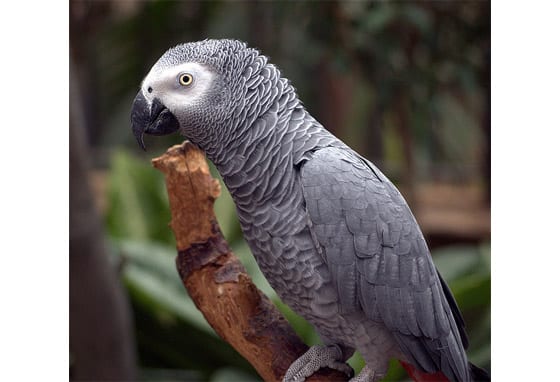 Did you know Alex the Parrot can ask a self-aware question?  Scientists have known for years that great apes and dolphins possess an intelligence far beyond what mankind normally understands animals to have. But for most of those years scientists had never successfully recorded an animal asking a philosophical question relating to what the animals were themselves. This is where Alex the parrot comes in. Alex, after learning what colors were and how to identify them, would one day come to ask what color he was. Alex the parrot is the first animal to ever be recorded as having asked what is understood to be an existential question. If that doesn’t give you chills, let’s take a look at this unforgettable bird’s story.

Alex was an African grey parrot born in 1976 who was adopted by animal psychologist Irene Pepperberg at the age of one. For 30 years Alex engaged in both a scientific and a personal relationship with Pepperberg, serving as a test subject for avian learning experiments. Alex died in 2007 suddenly, having lived only half of the years that African greys typically have to live. After so many years of study, Pepperberg wrote that Alex’s intelligence was on par with that of great apes, dolphins, and five-year-old humans. She also suggested that Alex had the emotional level of a human two-year-old, and that his untimely death cut short the immense intellectual progress he could potentially have made throughout the rest of his years.

The Tests and the Scores

Pepperberg used tests to build Alex the Parrot’s vocabulary and understanding. She would bring him objects in order to educate him on concepts such as size, differences, numbers, and colors. At the end of his life Alex had a vocabulary of over 100 words. What was really incredible, however, was his intuitive understanding of those words. He could correctly identify materials, shapes, and colors, and often reacted sassily in situations where he was either being teased or not given what he wanted. He would say “I wanna go back [to a location]” when he was tired of being tested, and if he wasn’t taken to that particular location he would express frustration.

If he was taken to the right location, he would sit quietly and calmly. This is exceptional in that Alex had not been taught to say a location of where he wanted to go, but had picked them up by himself through researchers asking him about where he’d like to go. Alex the parrot was also known to attempt to assuage a researcher’s physical irritation by saying, “I’m sorry.” He could differentiate between personal pronouns, referring correctly to himself and others with “I” and “You.” Alex was further aware of the concept of zero. Impressed yet?  Alex also called an apple a “Banerry” after having been really only ever exposed to bananas and cherries.

And yet none of those accomplishments quite matched what he would do next. One day Alex was brought in front of a mirror. Alex looked himself up and down curiously, and then verbalized perhaps the first human-witnessed existential question an animal has ever posed: “What color?” After being told “grey” several times, Alex learned that his own color was grey. To put this in perspective, while apes have been trained to use sign language, they have never asked a question. Alex not only asks a question, but asks a question about himself.

It is possible that Alex was only parroting the researchers’ questions from his tests, but this was an entirely different situation with an entirely new context. Alex saw himself in the mirror, identified himself as a self, and asked a question about that self. Alex’s early death marks a terrible tragedy in the pursuit of understanding the intelligence that fellow Earthlings really do possess. If Alex asked a question about himself before his life was half over, what would he have been asking when he was at a ripe old age?

You will also like: UFO Sightings: Video stirs the web

The Question for Us

It’s easy to pretend that we don’t know what we know about the intelligence of other animals. It’s far more comfortable to shut one eye and continue to dominate the planet in a selfish race for complete human independence. Humans may possess language, culture, and learning, but how much longer will we be the only ones with these three distinctive traits?

How much longer before we discover that dolphins have been creating their own underwater civilizations for years? We may never find these things out, but if they weren’t true of the past, they will undoubtedly be of the future. It’s also time that humans started being honest with their own questions about themselves. Humans, in particular, ought to be considering their treatment of fellow Earthlings who might just be asking profound philosophical questions we ourselves cannot answer.

You should also read: Valerie Lukyanova is a living doll