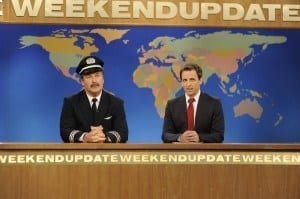 Alec Baldwin has had the last laugh in his “Words with Friends” run-in with American Airlines.

In a cameo appearance on Saturday’s show, Baldwin appeared onstage with Seth Meyers during the Weekend Update segment. Baldwin, in costume as captain Steve Rogers, apologized to himself.

“It was awful Seth,” Baldwin said. “Which is why it was important for me to come tonight here and, on behalf of everyone at American Airlines, issue an apology to Mr. Alec Baldwin!”

“Mr. Baldwin is an American treasure, and I am ashamed at the way he was treated,” Baldwin added.