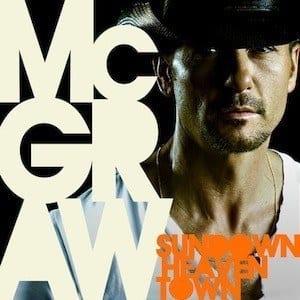 Raised by a mother who insisted that Tim McGraw was my dad growing up, I could go on and on about why I think he’s one of the greatest artists to ever exist in country music and why his latest album, Sundown Heaven Town is a refining tracklist that proves—despite his age— modern country is still country.

Sundown Heaven Town features 13 tracks (18 on the deluxe version) which signify the turning of a page for McGraw who shows to be a little more adventurous in the musical risks he takes on his 13th studio album.

The album kicks off with “Overrated,” an organic track that opens with a little bit of banjo before picking up the pace with lyrics that insist love is all you need. The song is followed by “City Lights” which show us a little more of McGraw’s Louisiana twang that wasn’t as apparent before in his past records. He pulls it off well to say the least, making this one of the best cuts on the record and undoubtedly a future single release.

“Shotgun Rider,” the second single released from the album follows and features a sweet combination of organic guitar strumming with guitar riffs as the lyrics are a tribute to finding that special someone.

“Dust” is perhaps one of the most adventurous, risk-taking tracks on the album. With a Jason Aldean and Florida Georgia Line, bro-country, rock influence the song is undoubtedly like nothing McGraw has ever produced before but something that certainly serves him well. This track showcases his versatility, something other artists his age refuse to accept and adapt to, making McGraw’s more modern work relevant in the current status of country radio.

“Diamond Rings and Old Barstools” is one of the more emotional tracks on the album and this one happens to feature McGraw’s cousin, Catherine Dunn who contributes a stand-out harmony. “Words Are Medicine” is one of best cuts on the album and perhaps one of McGraw’s more contemporary songs.

“Sick Of Me” is a song that all of us can relate to at one point or another and perhaps showcase some of McGraw’s most introspective lyrics of his career as he sings about reflecting on life and noticing a lot of things you don’t like but realizing that in order to move forward and recover the change starts with yourself.

“Meanwhile Back At Mama’s” features wife Faith Hill and is the first track from the album that made its way to high standing in the charts. A radio hit, the song goes back to McGraw’s roots and is an emotional ode to a simpler life. The duo’s performance at the ACM Awards was the most talked about and has since earned them CMA nominations.

“Keep On Truckin” is a windows down, cruising down the highway jam with a funky groove, far different from anything McGraw has produced before and despite it’s unique groove, it’s hard to ignore this carefree song that serves as a reminder to well…keep on truckin’ on because we’re all going through something.

“Last Turn Home” is another love story of a man who returns home to the open, loving arms of a wife whose love is a crazy adventure of its own, a sweet ballad nonetheless.

“Portland Maine” brings us to crossroads of not knowing what path to follow. The lyrics tell the story of a man who is caught between choosing what is easier and what he knows is the right thing to do, an all too familiar feeling many of us can relate too.

Overall, Sundown Heaven Town is the beginning of a new era for McGraw who has seen much success over the course of his career to date. The album is adventurous, daring and takes a lot of musical risks which seem to have worked well. All-in-all, McGraw’s courage to take so many musical risk on one album signifies his versatility and adaptability as an artist, qualities that have and continue to make him one of country music’s most influential artists.