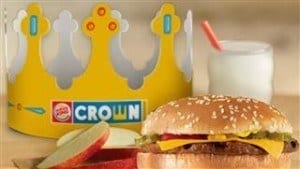 Burger King is hoping on the bandwagon to healthier eating habits following recent moves by McDonald’s and Wendy’s and pressure from advocacy groups.

We have removed fountain drinks from our kids’ menu boards and they are no longer merchandised as part of kids’ meals,” the company said in an emailed statement to NBC.

Although fountain drinks will not be on the menu boards under kids meals, the company says new drink options can be substituted for a fountain drink upon customer request.

Instead of a fountain drink to accommodate the kids meals, Burger King will now offer 100% apple juice, fat-free milk and low fat chocolate milk as alternatives.

According to Director of Nutrition Policy for the Center for Science in the Public Interest, Margo Wootan, the change to menus across the three major fast food chains will have a positive impact on lifestyle habits formed as children.

“It will help children eat better now, as soda is the leading source of calories in children’s diets,” said Wootan.