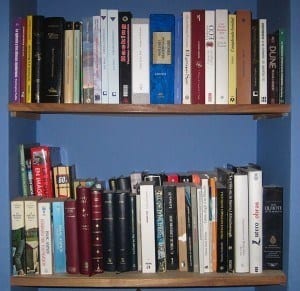 A Wrinkle in Time, the book by Madeleine L’Engle, turns 50 this year.

A Wrinkle in Time has become a best-selling classic, but we are lucky it was published in the first place.

L’Engle’s granddaughter Charlotte Jones Voiklis told All Things Considered host Melissa Block this week that publishers did not know what to do with the book at first.

“Was it for adults, was it for children? What is this, science fiction? Oh, I know what science fiction is, but there aren’t female protagonists in science fiction. Are you sure you want to talk about good and evil—isn’t that a little bit philosophical? Can’t you just cut that part out,” Voiklis said.

A Wrinkle in Time is a story about a girl whose father goes missing after working on a mysterious project called a tesseract. Bring in a wormhole, and a mysterious and rather scientific adventure begins for the main characters.

A 50th Anniversary Edition of the Newberry Medal winning novel has been released in both hardcover and paperback. An introduction by Katherine Paterson, author of Newberry winning Bridge to Terabithia, has been added to the book. Paterson talks about her own first experience reading A Wrinkle in Time.

Whether you’ve never read A Wrinkle in Time, or it’s been awhile since you’ve picked up a copy, or you read it every year, a 50th anniversary is an excellent reason to pick up a best-selling classic like this.