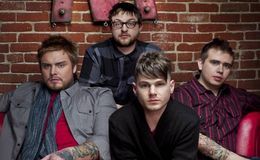 The L.A. band brings a new sound to the mainstream

For those of you who are bored with the songs on your favorite play list, A Million Pieces, the new up and coming pop/ rock band from Los Angeles, might be something worth checking out.

The band describes their music as “edgy pop music with attitude,” but with its new sound, songs such as “Laserbeams”, the bands single, and “Get it Right” can also be appreciated by independent music fans. The keyboard and banjo parts add a vintage 80s pop feel to the music, while the percussion and vocals modernize each song and create an entirely new outcome.

Jerrod “Skins” Bettis, the original drummer for OneRepublic, produced the band’s first six-track, self-titled EP, which was released last month. “After producing pop record after rock record after hip hop record, it was a natural progression to be involved with a young, up-and-coming rock band,” says Bettis. “ These guys are awesome and talented…It became a personal project for me and it was really awesome to be a part of it.”

A Million Pieces formed in Southern California. The singer, Morgan Freed, and guitarist, Peter Vanderloos began writing and recording songs while living in a communal house in Laguna Beach. “When that’s what you do and that’s what you’ve always done, you can do it in any environment,” says Morgan.

Former punk bassist, Ryan Brown, and multi-instrumentalist, Stephen Soss, who plays everything from keyboards to drums, trumpet and banjo, then joined Freed and Vanderloos to complete the band. “We’re not dark and mysterious, were honest,” Vanderloos says. “We like to laugh, have fun and be idiots. We’re serious 10 percent of the time.”

For more information about A Million Pieces, feel free to take a peak at the band’s Web site or follow them on Facebook, Twitter, or Myspace.

You can check out the official video for their song “Laserbeams” below!