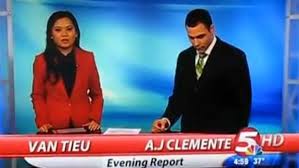 A.J. Clemente had his first broadcast ever last Sunday with KFYR-TV in Bismarck. However, in all of his excitement, he uttered profanity on air that ended up costing him his job.

KFYR-TV is an affiliate of NBC, and Clemente had been hired on as a weekend news anchor. As the program opened up, Clemente whispered, “F—ing sh-t,” into his microphone, the very first words he said on air.

Directly following the broadcast, Clemente was fired for using profanity, and on the 10 p.m. broadcast, coanchor Van Tieu apologized for the incident.

“We were caught off guard, and [Clemente] didn’t realize his microphone was on. And while that was no excuse, we do train our reporters to always assume that any microphone is live at any time,” Tieu said and followed with an apology.

Clemente also apologized for the incident with a Twitter update.

“Tough day,” he wrote. “Thanks for the support. We all make mistakes. I’m truly sorry for mine. I’ll try my hardest to come back better and learn from this.”

However, Clemente did not get the chance to make a better second impression, as the station decided to let him go Monday, despite the rise of the Twitter hash tag “Keep AJ.”

He again tweeted about the incident, writing, “Rookie mistake. I’m a free agent. Can’t help but laugh at myself and stay positive. Wish I didn’t trip over my “freaking shoes” out of the gate.”