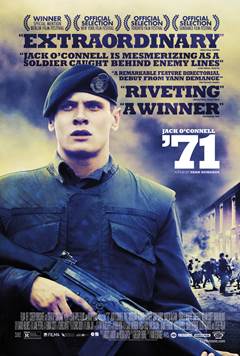 Yann Demange’s war flick ‘71 is not for the faint of heart or for those who prefer to view right and wrong in terms of black and white, but it is an epic, suspenseful, and masterful display of storyline and cinematography.

‘71 is set in Belfast, Ireland in the midst of the Troubles. The Troubles was a conflict that began in the late 1960’s between the Loyalists and Nationalists. The Loyalists fought for Northern Ireland to remain a part of the UK, while the Nationalists fought for a united Ireland. This conflict went deeper with the discrimination against the Catholic minority by the Protestant dominated population.

‘71 follows Jack O’Connell, a young british soldier through quite possibly the worst night of his life. Each time you think it’s all going to be okay, just wait. This poor soldier just can’t catch a break.

From the beginning, you’re immediately drawn in with the comradery among the soldiers and O’Connell’s faith in the military. The quick paced storyline and consistent tension and suspense is enthralling and firmly holds your attention throughout the film.

The visual effects are stunning, with carefully orchestrated shots to put you in the center of the chaos. In fact, if you’re prone to motion sickness, I recommend popping a Dramamine before heading into the theatre.

‘71 allows for movie-goers to really feel connected to the character and his experiences. Although this film is set in the 1970’s in Ireland, it still has themes very relevant to today. The concept of uniformed military fighting against a civilian force has been something Americans and many other countries in the world have been struggling with for years. The destruction and emotions depicted in ‘71 will likely continue to be very relevant for years to come.

One difference that adds to the uneasy sense of right and wrong being shades of grey is how close these two sides actually are to one another. Unlike two supremely different cultures that are worlds apart, the sides of the Troubles come from very similar backgrounds and have so much in common, it makes it easier to relate to them and more challenging to fight them.

In addition to the on-the-edge-of-your-seat suspense, this film also offers a few moments of  giggles. Your new favorite quote may just be “hands off your cock and put on your socks.” A bloody and epic battle flick with just enough humor to keep you from having a heart attack in the theatre, ‘71 comes highly recommended by College News. Unless you have a sweet-ass home entertainment system, we recommend catching this one in theatres to enjoy the full effect of the mayhem.