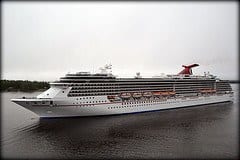 The “Dream”, owned by Carnival Cruise Lines, has been docked for 7 hours–but passengers can’t leave the ship

Another cruise ship nightmare is brewing—this time aboard the “Dream”, a ship operated by the same company responsible for the debacle last month, when overflowing toilets and an engine room fire ruined the vacations of thousands of people.

According to the Coast Guard, the ship’s emergency generator has failed, causing interruptions to sewage systems and elevators.

The company, Carnival Cruise Lines, ordered a “comprehensive review” of all its ships just two days ago. But they must have missed the “Dream, as passengers have been calling news outlets from the ship to detail their so-called “vacations”. The stories include malfunctioning toilets, feces on the walls and being trapped on the ship.

“There’s human waste all over the floor in some of the bathrooms and they’re overflowing — and in the state rooms. The elevators have not been working. They’ve been turning them on and off, on and off,” Gregg Stark, who is on the cruise with his family, told CNN.

The ship has been docked Philipsburg, St. Maarten, in the Carribean, for hours.

“We are not allowed off of the boat despite the fact that we have no way to use the restrooms on board,” Jonathan Evans, of North Carolina, told CNN in an email. “The cruise director is giving passengers very limited information and tons of empty promises. What was supposed to take an hour has turned into 7-plus hours.”

A Coast Guard member told CNN the reasoning behind keeping the passengers on the ship.

“We have spoken to the captain and right now, the decision has been made to have the passengers remain aboard the ship for accountability purposes. The last thing we want to do is have someone get left behind in St. Maarten by accident,” said Coast Guard Chief Petty Officer Ryan Doss.

According to passengers, the captain of the ship initially announced that a crew was attempting to fix the problem. But later, another announcement came over the PA system which said the problem was more severe than originally thought.

CNN contacted a Carnival Cruise Lines representative, who said he wasn’t aware of any problem. Several other phone calls were left unanswered.