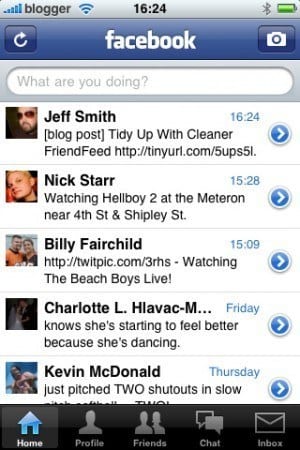 The What Would I Say Facebook app is literally another step until we become those fat people flying around on wheelchairs with no personalities in the movie Wall-E. Social media sites already prevent us from having organic social interactions, but now Princeton grad students are taking it a step further with the introduction of an app that will generate Facebook statuses for you, because you know-being myself is so hard!

The What Would I Say app works by taking all of your old statuses and runs it through a bot, which then spits out a status that would resemble something you would say. The results often turn out to be closer to what Salvador Dali would say, considering the bot often produces nonsensical surrealist phrases that often make no sense at all unless you had some sort of green-leafy plant to help you get it.

On the What Would You Say website, the creators of the app explain how it works. “Technically speaking, it trains a Markov Bot based on mixture model of bigram and unigram probabilities derived from your past post history.”

They also went on to explain that no privacy will be invaded with the use of What Would You Say. “Don’t worry, we don’t store any of your personal information anywhere. In fact, we don’t even have a database! All computations are done client side, so only your browser sees your post history.”

The app was created by Princeton grads Pawel Przytycki, Ugne Klibaite, Vicky Yao, Daniel Jiang, Edward Young, Harvey Cheng and Alex Furger during Princeton’s Hackathon. Since the reveal of the app, What Would I Say has gone viral, gaining nearly 1 million hits and counting to the app. One of the creators, Ugne Klibaite explained how What Would I Say was never expected to garner all of this attention. “This was just for fun,” Klibaite explained to The New Yorker. “We never thought we would get any further than showing this off to the Hackathon and to our friends on Facebook.”

I tried to access the What Would I Say App myself to see what kinds of LSD dreams I concoct from my past statuses, but the website is currently down probably due to a crashed server.