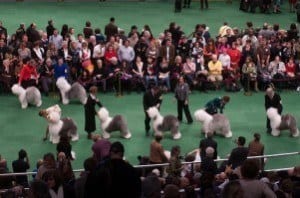 NYC has gone to the best-smelling dogs in the business

Westminster Dog Show is an annual aggregation of over 2,700 perfectly coiffed and coached pups in New York City.  Over 187 breeds will compete in this year’s Westminster dog show, with the most recent additions of the Russell terrier and the Treeing Walker coonhound, only one of which this writer is currently able to visualize.

The Westminster Dog Show is a vewy, vewy sewious event, which anyone who has watched “Best in Show” will acknowledge and will either avoid or gape at this upcoming week.  The 137th annual show will unfold from 8 to 11 p.m. on CNBC, and best in show will be announced Tuesday night after hours of bated pants and dog-eat-dog competition.   Each dog is separately judged in relation to its breed, with a checklist for excellence in grooming, gait, size and temperament.  Judges also base their decisions on a pooch’s certain “je ne sais quoi” says former judge Cindy Vogels.  She admitted, “I think that’s doggy charisma, plain and simple.”

Tips and speculation for Westminster Dog Show victory are manifold.  In general, complicated breeds tend to be more successful than breeds like America’s favorite Golden Retriever, because good dogs are all the more rare and eye-catching.  This year, crowds should keep an eye on a certain Doberman named Veni Vidi Vici, and an American foxhound named Pandora’s Box, both successful returnees to the Westminster Dog Show.  Banana Joe, an affenpinscher, has already earned three-peat status at this year’s Westminster Dog Show, and undoubtedly has his eye on the grand prize as well.