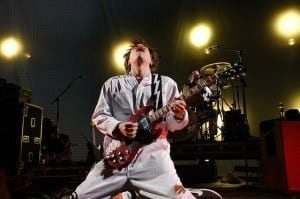 American rock band, Weezer released their first single, “Back to the Shack” since 2010.

It’s been four years since Weezer last released new music, but that all changed earlier this week when they released their latest single, “Back to the Shack” which debuted on the band’s Weezer Cruise back in February.

The song is the lead single off of their forthcoming album, Everything Will Be Alright In The End.

“Back to the Shack” is just as fun and catchy as any of Weezer’s old hits. The nerdy alt-rock jam received its television debut Wednesday when the band performed on The Tonight Show Starring Jimmy Fallon.

In a recent interview with Entertainment Weekly, drummer Pat Wilson described the upcoming album’s sound as a sweet combination of Weezer’s first two albums: “If you took the Pinkerton band and then play all the other records — that’s what we sound like now,” said Wilson. “Bombastic, loose, kind of booming. This record sounds like it’s going to have the tight structure of Blue Album with a little bit more abandon like Pinkerton.”

“Back to the Shack” is available now on iTunes.