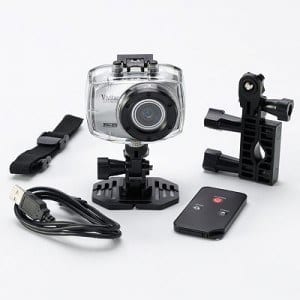 Great for messing around, but not good for serious camera work

As summer approaches, all of the fun activities that go with being outside begin to manifest as well. Biking, hiking, swimming, horseback riding, rock climbing and many other wondrous summer activities will be in full bloom and there needs to be some way to document it all. Sure, we all have our smart phones, but no one wants to duct tape their smart phone to their head while attempting to surf or something of that nature.

That is where the Vivitar DVR 787 HD Action Camera comes in. The affordable alternative to the Go Pro, the Vivitar 787 HD allows you to strap on your camera to your bike or your head and film whatever high-octane action, you may be engaged in at the moment.

The Vivitar 787 HD Action Camera is surprisingly clear with it featuring 1080p high definition visuals. To test out the POV intensity of the camera, I used the included bike mount and mounted it onto the handlebars. Even though the bike ride was filled with bumps due to the current pothole epidemic in Chicago, the camera remained surprisingly steady throughout the entirety of my 40-minute bike ride.

The sound quality isn’t that great, but what can you expect for an action camera that ranges in the $40-50$. The Vivitar 787 HD Action Camera also comes with a wall charger, USB cable, ATV/Bike mount and a helmet mount.

The Vivitar 787 also comes with a clear waterproof enclosure for coveted underwater pool shots. I didn’t have a pool around at the moment, so I used the next best thing-my bathtub. The underwater shots are surprisingly really clear, the sounds is even more warped when it is under water, but if you are really going for a dramatic underwater effect, sounds can be added into videos later.

I wouldn’t use the camera to make an important documentary or feature films. It is a good camera to bring on vacation or a road trip, but if you want to do some serious work with an action camera, I would suggest coughing up an extra $50 for a GoPro.