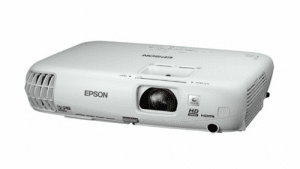 I’ve touched on the fact that most consumers acknowledge that your average physical televisions are widely regarded as being better than your average projector, which is why I’ve set out recently to determine whether that can be proven. Of the projectors I previously spent time with, the most impressive was the Epson Powerlite Home Cinema 8350, delivering bright, colorful picture even in rooms where natural light exists. Since then I’ve spent time with others, though none quite as impressive as what Epson was able to produce. I’m happy to say they’re at it again, only this time they’re presenting a projector that might be a better “fit” for the dorm or apartment life. The Home Cinema 750D is a smaller projector, measuring only a fraction of the size that the 8350 is, but delivering some features that were absent in the larger, more expensive model. For those living on something of a budget or in an area that has limited space, you might find this being worth your time and money.

To mention it right off the bat, the 750HD has 3D capability and this may be a selling point for some consumers. Unfortunately, 3D is a technology that is yet to catch-on to the same effect that HD did, meaning it’s not something that will be universally adopted. It’s an interesting feature to have and works well, particularly if you’re playing a game or if you own a PC graphics card that has 3D capabilities, but overall 3D is more of a gimmick than a selling point. Still, seeing Batman Arkham City in 3D via Xbox 360 is pretty awesome and because the projector comes with a pair of 3D glasses (normally around $99 each), it’s that much more of a bargain.

Another important factor is the resolution, clocking in at a disappointing 720p. Normally consumers will want to upgrade to 1080p when your picture sits at 42” or more, so with the 90” screen that the 750D offers, 720p doesn’t reach the full potential that you may want from a home cinema. What is impressive, and quite so, is the 3,000 lumens that this bad boy pumps out. Lumens are essentially how bright the projector is and with 3,000 of them blasting onto your projector surface you’ll find quickly that you can see the screen easily, even with natural ambient light shining through  your windows. The downside to a projector that bright is that in your dorm room or smaller apartment, turning the lights out for a movie night will only make the projector seem brighter, which may kill any mood you’re trying to set.

Finally, some intangibles are present in the design and shouldn’t go unmentioned. The 750D has eight inputs, including two USB, VGA, S-Video, HDMI, component, composite, and RCA, meaning you’ll be able to connect nearly everything you own to it. Staying relatively quiet and cooler than you’d expect for such a small design, you can easily fit this on a desk or small table and then move it out of the way when done, something that couldn’t be said for the bulkier (and more expensive) 8350. The focus is adjusted manually, but it’s not that big of an issue, particularly because it’s designed to be used in smaller rooms anyway, though a simple “set it and forget it” philosophy can be implemented if you don’t intend on moving it for each use.

At $799.99 the Epson Home Cinema 750D isn’t particularly expensive, but there are design choices that will deter you from using this as your primary monitor for basic computer use. As a gaming or cinema option though, even with your typical television viewing, you’ll be hard-pressed to find something that works as well and offers the reliability of a two-year warranty. Even though it suffers from the lack of a 1080p option, 720p is passable thanks to the brightness. Finally, you’ll want your own home audio system as well due to the lack of speakers, a mainstay in the world of projectors. For basic television viewing and PC use the 750D is not for you — nor is it designed for that. As a home cinema, setup or mounted within your home, apartment, or dorm room, this is ideal. You’ll quickly become the go-to place to watch movies or sporting events and a 90” screen, even at 720p, will impress all watchers.