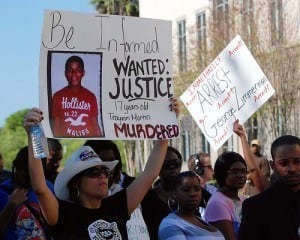 Over 500 people have received summonses

Trayvon Martin’s killer, George Zimmerman, met with potential jurors in a packed Florida courtroom. Five hundred people have received summonses for one of the most high-profile cases in recent history and 100 of them reported to the courthouse Monday. The defense and prosecution in the Trayvon Martin murder trial are looking for six jurors (and a few alternates) and the jury selection is expected to take two weeks.

However, mass public outcry over racial motivations, the police investigation and Florida’s “Stand Your Ground “ law led to demands for Zimmerman’s arrest. Less than a month later, charges were filed against Zimmerman and he was later released on a $1 million bond as he awaited trial.

Trayvon Martin had a disciplinary record at his high school, where he had been suspended at the time of his death. Zimmerman has a record of assault, resisting arrest and domestic abuse. Witness reports vary with some stating that Trayvon Martin had Zimmerman pinned to the ground and attacking. Other witnesses say that it was Zimmerman who had pinned Trayvon Martin down, and that Martin was crying for help. Another witness was found to have lied under oath. On top of that, cries for help can be heard in the background of the recorded 911 phone call, although the defense claims the cries came from Zimmerman, while the prosecution claims the cries are from Trayvon Martin. Neither the FBI, nor audio specialists have been able to confirm whose voice is heard on the recording.

The media frenzy surrounding the trial is only set to increase once jury selection concludes. If found guilty of the second-degree murder of Trayvon Martin, Zimmerman faces up to 25 years in prison.