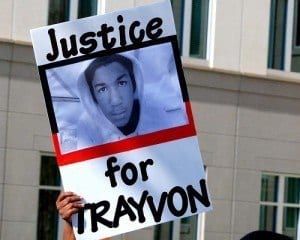 Justice officials are planning to meet today with the parents of Trayvon Martin, the 17-year-old boy who was shot and murdered by suspect George Zimmerman.

Police have recently released eight 911 calls made by Zimmerman who was a neighborhood watch volunteer. He told police on the first call the he was “following” Martin and that Trayvon Martin was running. The dispatcher went on to tell Zimmerman to stop his pursuit; he responded to the dispatcher,  “This guy looks like he is up to no good. He is on drugs or something. He also said the teen had his hand in his waistband and was looking at homes as he walked. Zimmerman continued, “These a******s. They always get away.”

The release of the Trayvon Martin 911 call caused a nationwide uproar, and over 1 million people have gone to Change.org to sign a petition calling for the prosecution of George Zimmerman.
“George Zimmerman took Trayvon’s life for nothing,” Trayvon Martin’s father, Tracy Martin, said at a rally for his son. “Our son did not deserve to die. There’s nothing that we can say that will bring him back, but I’m here today to assure that justice is served and that no other parents have to go through this again.”

After receiving Zimmerman’s 911 call, the Police department received a flood of calls people describing two men in a scuffle. There was screaming said one unverified female witness. “I just heard a shot right behind my house,” said another male caller. “They’re wrestling right behind my porch. The guy is yelling, “Help!” I’m not going outside.”

The grand jury is expected to take up the case next month. Hear George Zimmermans 911 call below.