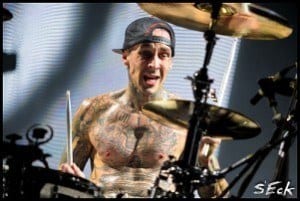 Travis Barker is doing everything he can to ensure that nude photos of him are not leaked elsewhere on the Web.

CBS News reports that gossip site MediaTakeOut posted nude photos of Barker, prompting Barker’s lawyer to issue a cease and desist letter. Reportedly, Barker’s name wasn’t mentioned on the site, but fans familiar with Barker and his band Blink-182 were able to identify him easily (thanks, largely, to his tattoos).

The nude photos of Barker are at least five years old and were “private and never intended for public viewing or to be seen by anyone else.”

Barker’s attorney is arguing over the “unauthorized use of private photos.” It’s not known how the site obtained the photos.