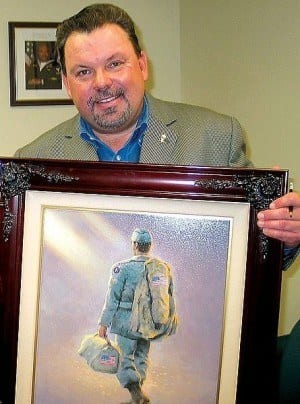 Thomas Kinkade, self-proclaimed “Painter of Light,” died unexpectedly on Friday, April 6. The artist was known for his biblical themes and idyllic landscapes.

A politically conservative Christian, Thomas Kinkade had a large flock of admirers but was disparaged by art critics for his kitschy paintings. Joan Didion once wrote that a typical Kinkade painting “featured a cottage or a house of such insistent coziness as to seem actually sinister, suggestive of a trap designed to attract Hansel and Gretel.”

Thomas Kinkade’s turned his pastoral vision of the world into a commercial art empire with franchised galleries, reproduced artwork and spin-off products said to get $100 million annually.

Kinkade’s empire included reproductions of his paintings in hand-signed lithographs, canvas prints, books, posters, calendars, magazine covers, cards, collector plates and figurines. “It’s mainstream art, not art you have to look at to try to understand, or have an art degree to know whether it’s good or not,” said Mike Koligman, who owns Thomas Kinkade galleries in San Diego and Utah with his wife.

This mass reproduction was another thing the art elite often disapproved of. “That was something that drove the art world crazy,” said Jeffrey Vallance, an artist who hosted a show of Kinkade’s work in 2004. “You were never really buying the real thing, you were buying something made by a machine.”

Even though Thomas Kinkade built his empire based on his wholesome image, some former employees, gallery operators and others have described him in a darker light. The LA Times published an article in 2006 accusing the artist of ruthless business tactics and crude personal behavior.

Regardless of personal opinion, Thomas Kinkade is sure to be remembered for years to come.