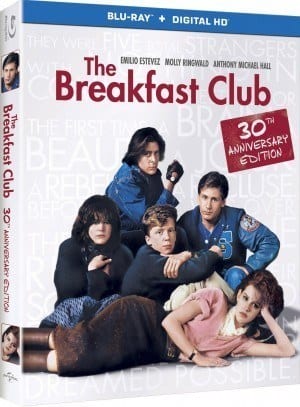 Thirty one years ago, five Chicago high school students showed up to a Saturday in detention as total strangers, and left knowing each other, and themselves, on a much deeper level. One of the quintessential brat pack 80s films, The Breakfast Club makes us almost long for the days of high school where nearly every event seemed simultaneously mundane and extreme. While we look back on most of these events and laugh at their insignificance, we all have to admit that there were parts of high school that changed our lives forever and helped shape the people we grew up to be. The Breakfast Club perfectly reflects that feeling. Plus, any movie that opens with a shattering quote from David Bowie has to be amazing, right?

In honor of the 30th anniversary of this iconic movie (it made it’s nationwide theater debut on February 15, 1985) we decided to count down our top five favorite scenes featuring the brain,
the princess, the athlete, the criminal, and the basket case. It was tough to narrow it down to just five, but here goes…welcome to detention!

5. A Ruckus The gang covers for Bender’s antics again, even after he totally pervs up Claire’s skirt. We love their half-assed yet successful attempt at defusing the issue of there being “a ruckus.” Disappointing fact: the joke Bender tells in the air ducts was entirely adlibbed and actually doesn’t have a punch line.

4. Blazing Up Can you say #peerpressure? But really, sharing a joint is always a good way to break the ice and get to know new people. This lovely herb breaks down their walls and relieves much of the cross-class tension, allowing them to have a little fun and show a truer side of themselves. “Do you know how popular I am? I am so popular, everybody loves me so much.”

3. Being bad feels pretty good None of them know why they do it or have any idea if they’ll get away with it, but they all follow Bender to his locker to retrieve his stash. And of course it wouldn’t be a classic 80s movie without a montage to a jazzercise worthy track. On top of the priceless Scooby-Doo like skids, you also have Bender’s selfless sacrifice. While he meant it as a front to save his weed, you can tell he really gives himself up for the good of the group. Plus, he’s pretty loveable running around the halls yelling “I wanna be an airborne ranger!”

2. Monkey Business The first real sign of this group joining together against Principal Vernon, or “Dick” as we prefer to call him. “Screws fall out all the time, the world’s an imperfect place.” Anyone could have thrown Bender under the bus for pulling the screw out of the door, but for some reason they all covered for him. Plus, it’s pretty entertaining watching Dick’s attempts to prop that door open.

1. “Sincerely Yours, The Breakfast Club” Our pick for the best scene of the movie, although it’s a little sad that Brian was the only one to leave detention solo. The feeling of victory when John Bender throws his fist in the air gives us chills everytime. Did you know that the track “Don’t You (Forget About Me)” was written for the movie?

These scenes were our top five, but here are a few more memorable moments that we just had to mention:

Creative uses for dandruff – what better way to add some snowy effects to your charcoal drawing?

Innovative lunch combinations – you know you wouldn’t have thought of a Pixie Stix/Capn’ Crunch sandwich if Allison hadn’t shown you. Although we can’t imagine that Claire’s sushi tasted very good after sitting in a paper bag under her desk for five hours, no matter how high quality it was. Also, if you want an excuse to eat an entire grocery bag full of food for lunch, just take up wrestling.

It’s too bad not many people dress like Barry Manilow, because “Does Barry Manilow know that you raid his wardrobe?” is a pretty great burn.

Not like the Coca-Cola they ended up with was particularly hydrating, but you have to applaud their solidarity. “I have a really low tolerance for dehydration.” “I’ve seen her dehydrate sir, it’s pretty gross.”

It’s pretty great that this movie gives you some killer dance moves to go along with its killer soundtrack, as well as a bonus eighties dance montage. In case you don’t own the soundtrack (which you really should) it’s Karla DeVito’s “We Are Not Alone.”