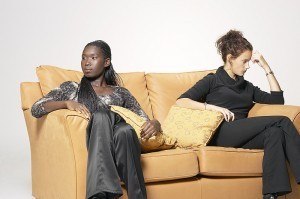 How to keep your head, and your property, when stuck with a terrible roommate

When Juan Espinoza’s roommates refused to sign the roommate contract, their decision served as a warning sign of what was yet to come.

At first, everything appeared fine. Then Espinoza came back one day to find his drawer opened and found his pencils and pens taken without his permission.

One roommate would eat Espinoza’s food, bring guests over late at night and leave the room a mess. The night before Espinoza’s midterm, that same roommate came back drunk and loudly made love to his girlfriend. Later in the year, when the roommate told him that he would need the room, Espinoza was “sexiled,” a term used for people forced to leave the room because their roommate is having sex.

The other roommate was hardly any better. Since he had transferred, Espinoza introduced him to his group of friends. Although he appeared friendly, the roommate began to talk behind his back and concoct ways to exclude him from group events.

The exchange of roommate horror stories has become a tradition on college campuses. Whether the roommate is messy, promiscuous or too much of a party animal, their lack of consideration has pushed countless students to the limit.

In graduate school, Victoria Namkung roomed with a body builder who would engage in Tae Bo kickboxing workouts at 5 a.m. and go on cycles of binging and purging. Although Namkung’s friend attempted to mediate a talk between them, the roommate wasn’t interested in changing.

Namkung’s experiences led her to co-found the website My Very Worst Roommate, where users can anonymously vent their roommate horror stories.

“If you answer an ad for a roommate, you may face some factors that you don’t sign up for,” Namkung said.

Most of the stories on the website revolve around hygiene issues, mold and dirty dishes. Some roommates shirk on paying equal rent, while others steal. Namkung’s favorite story involves an art student who moved to New York City. During her two-week stay, she met an interesting cast of characters, from a chain-smoker who wore her clothes without permission, to a Columbian drug lord.

Most people don’t want to terrorize others, Namkung said, but some may be very narcissistic or may have been brought up in a household where someone always cleaned up after them. They may not have had boundaries growing up and not realize how much they’re affecting their roommates.

For Espinoza, his parents had him adhere to strict rules in his household, cleaning up after himself and apologizing when he made mistakes. But he acknowledges that many roommates come from different customs and backgrounds.

In dealing with a roommate conflict, communication is always the best policy, said Kathryn Williams, author of “Roomies: Sharing Your Home with Friends, Strangers, and Total Freaks.”

“If your roommate is messy, ask nicely if they can clean up after themselves, or at least contain their mess to their own space,” Williams said. If the roommate is noisy or inconsiderate, talk to them about how it affects you. Ask to set up designated quiet hours and take parties elsewhere. While it may not be for everyone, rooming with people of different cultures or backgrounds can be a wonderful experience, said Williams. However, she also stresses that it’s important to feel comfortable and accepted by your roommate, not just tolerated.

“Don’t just stew silently as you clean up after them or let roaches take over because you refuse to wash their dirty dishes. If they still don’t respect your request, it may be time to get passive-aggressive,” she said jokingly. “Or find a new roommate.”

One key point is not to wait too long to discuss your frustrations and expect things to get better, said Susan Fee, a professional clinical counselor and author of “My Roommate is Driving Me Crazy!”

“Although it can feel awkward, the best thing to do is sit down with your roommate immediately and discuss lifestyles and expectations,” she said. “Everyone defines ‘messy’ or ‘loud’ differently.” She also advises people to give examples and be specific.

“Start with the assumption that the other person is merely ignorant rather than malicious,” Fee said. “Students have come from all sorts of homes and families, you may be offended by something that the other person is clueless about. That’s why early (face-to-face) communication is necessary, otherwise, you’ll be missing out on a critical skill of how to address conflict.”

Eventually, Espinoza’s roommates moved on and he had his room to himself. But in spite of their lack of consideration, Espinoza said he still wouldn’t have changed his rooming situation.

“It was a good experience not because it was hard, but because it [taught me] there are a lot of different people out there, and not everyone is as nice, not as neat and not as disciplined as you,” he said. He also credits his experience to encouraging him to apply to be a student leader in order to help other students with their housing experiences.
Espinoza advises students to set boundaries from the beginning, being as specific as possible and making sure that their roommate understands. They should also be clear and straightforward about their needs, like when they need to study, and keeping open communication.

Lastly, he appeals to the golden rule, “Treat others as you wish to be treated.”