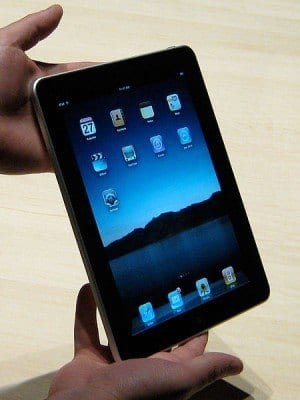 At a conference in San Francisco Wednesday, Apple introduced the new iPad, but it’s not the iPad 3.

Apple Inc. has introduced a new version of one of their popular devices, the iPad Wednesday during a conference, according to Bloomberg News.

The device will cost between $499 and $829 and has an A5X chip that will allow for better graphics. The event in San Francisco also explained how the iPad will have a 9.7 inch screen “that has more pixels than traditional high-definition televisions and run on so called long-term evolution, or LTE, wireless networks, according to Bloomberg News.

The retina display is one of the new iPad’s most obvious new features with 264 pixels, though the display is not as clear as the iPhone 4S, Olivarez Giles says, “…it’s still a million more pixels than an HDTV.”

Along with a better screen comes a better camera. The new iPad will have an iSight camera, just like the iPhone 4S.

This new version will hopefully help fight off competition from the Android operating system and Amazon.com’s Kindle Fire, which for $199 has been popular in this economy where people are always looking to save.

The new version will be released March 16 and Apple has already been taking orders.

AT&T and Verizon will be the first of the U.S. wireless carriers to sell the device.
The 4G connection will make it easier to download larger files and it is reported that consumers will still get the nine hours of battery life while using 4G. Devices running on 4G have, in the past, had a tendency to drain the battery’s life.

Critics seemed to be upset with the lack of Siri. Adrian Kingley-Hughes at ZDNet said, “Siri’s absence is the biggest disappointment by far.” Omitting it seems “strange and somewhat surprising. I wonder if this is because Siri is still in beta?”
To read more: click here