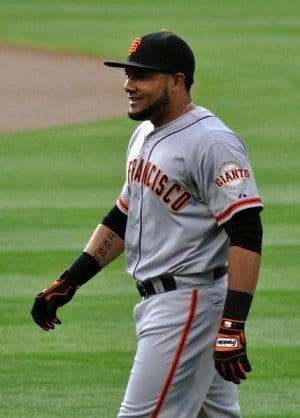 Having been acquired by the Giants this past off-season from the Kansas City Royals, Cabrera has been on a tear. The “Melk-Man” produced a league-leading 159 hits this season with 11 home runs, 60 RBIs and the second highest batting average in the National League at .346. The 2012 All-Star Game MVP, Cabrera was on par for the best season of his career and represented a complimentary run-producer next to Giants catcher Buster Posey.

Neck and neck with N.L. division rivals the Los Angeles Dodgers, the Giants have lost a valuable player in Cabrera and may be in jeopardy of relinquishing their division lead, and ultimately, bragging rights in California National League baseball.

Another substance abuse travesty smearing the reputation of America’s pastime, Cabrera made a statement via the major league players’ association expressing his regret:

“My positive test was the result of my use of a substance I should not have used. I accept my suspension under the Joint Drug Program and I will try to move on with my life. I am deeply sorry for my mistake and I apologize to my teammates, to the San Francisco Giants organization and to the fans for letting them down.”

A fan favorite this season, Cabrera has inadvertently spawned the “Melk-Maids,” a following of Giants fans enthralled by their 2012 season pickup from Kansas City.

Cabrera will now miss the remainder of the season while serving his suspension and can kiss his contention for MVP goodbye.

If anyone can make a group of grown men cry, the “Melk-Man” can.