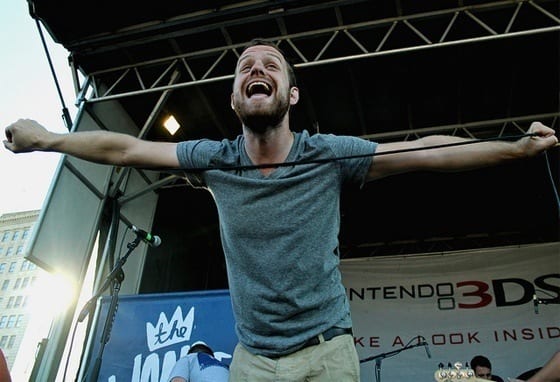 For a band that could have easily been named Jesus Christ and the Flying Thunder Foxes due to their lack of expectations, The Wonder Years have long since expanded their position in the scene. Based in Philadelphia, Pennsylvania, TWY are pop punk heros who have since been featured on the cover of Alternative Press magazines Warped Tour issue and have received positive reviews for their latest album “Suburbia: I’ve Given You All and Now I’m Nothing.”

In an impromptu interview with the energetic and amicable frontman Dan Campbell (aka ‘Soupy’) at the Sam Houston Race Park on June 25th proved to be a wealth of surprises and stories, ranging from a possible future in law to rival high school football teams and even his affect on the 2008 presidential election.

Allyce Andrew:  What color would the sky be if it was not blue?

Dan “Soupy” Campbell:  What color would the sky be if it wasn’t blue?

DC:  I guess clear, because I guess the idea of the sky being blue that’s like what, what is it – there’s a UV light spectrum, right? Is that how it works?

DC:  So was I, that’s why I’m trying to think back to like eighth grade.

DC:  I was, I graduated actually like last month.

AA:  From what school?

DC:  From temple University in Philly. I went to school for secondary ed and english, right and I have been done [with] all my classes for two years now but in order to graduate in secondary ed degree you’re supposed to student teach and I didn’t have time for that since we’ve been on tour since I finished my last class. So, I went back and said can I have my degree and not my certification and they said okay but I have to take one more class so I did it online last semester and I finally graduated college.

AA:  Do you think that it’s important for a band to have a college degree?

DC:   I mean it’s not important for a band to have a college degree, but I don’t plan on doing this for my entire life.

DC:  I did want to teach but now I kind of think I want to go to law school, is my new thing. I don’t know, I also like writing a lot so I might try to write freelance for some magazines in my spare time and the business side of music, I get really into. I like logistics — how did this come from the sky being blue? [laughs]

I guess if you couldn’t see the sky being blue you would just see the blackness of space above it.

So, I’m super I don’t know, neurotic so I like everything to be in spreadsheets and lists and I like maps.

AA:  You could be a manager someday.

DC:  Well, I like booking. There’s a band from Ohio called Mixtapes that I’m booking them now and I’m not doing the worst job in the world. It’s definitely not great but I’m doing my best and they’re amazing.

AA:  So, you want to like stay in music even if it’s not making music?

DC:  Yeah, maybe. Or maybe I’ll go to law school — I’ve been reading up on that lately and starting to read LSAT books and then two of our band members are music industry majors and one of them is thinking about law school for copyright intellectually property law and I don’t know what the other is thinking about.

AA:  What are you thinking about?

DC:  I don’t know… I don’t know, I thought about entertainment law, I also was thinking criminal law but then I don’t want to defend like a f’ing rapist, you know what I mean? I don’t really know, I’m still kind of ill researched on the topic so I guess I shouldn’t speak too much on it.

DC:  That would be a disaster. [laughs] Kennedy, our drummer is an anthropology major and he got accepted to George Washington University for a Grad School program for Comparative Religions and actually ended up turning it down to come on tour with us. They extended his acceptance so he can go back and do that after the bands tour which is amazing because George Washington is obviously a prestigious school.

AA:  Which is probably why I’ve never heard of it. [laughs]

DC:  It’s in DC. Our guitar player Matt is a film major and he just went to Warped Tour film crews and our other guitar player Nick ran a recording studio before this and worked at a screen print shop and I’m sure he’ll do those things afterwards, too.

AA:  Those are all great alternatives, though.

DC:  Yeah and the thing is we love doing this band but we’re all realist people. We realize that trends change and eventually people are going to hate our band no matter what we do, it’s impossible to change that fact and eventually the tides will turn and like everyone will love like techno jazz and we won’t want to play that and we’ll stop.

AA:  Were you guys like rival high schools, did you hate them?

DC:  No, our high school hated a high school called CB West and our football teams — how f’ing stupid, like bro movie is this — our football teams got in like a giant fist fight in the parking lot. It felt like the bro version of Grease, you know what I mean  And apparently, one of our football players went to jail for kicking another players teeth in. But we got along, I went to North Penn the rest went to Wissahicken and we all got along.

AA:  That’s good, you didn’t have to kick anyones teeth in to avenge your football team.

DC:  No teeth kicking, because I would. Because football’s life.

Random conversation ensued from the topic of Sunday football to sunglasses and led to The Wonder Years’ classification in the pop punk spectrum of the scene.

Katie Pucheu-Morvant [filmer]:  And how long have you guys been together?

When we started this band we were like if we do an East coast tour we will have accomplished every goal this band has ever had and now we’ve toured Russia. So, you never know.

DC:  I have a standard fall back story when people ask me this question because I’m always bad at being put on the spot but during the 2008 presidential election we were driving and John McCain had a bus called the Straight Talk Express  — all over the side it said “straight talk express” and we were driving on the highway and all of the sudden in was next to us. So, we honked the horn and Kennedy hung his testicles out the window at it.

So Mike Kennedy, our drummer, hung his testicles out of the window at John McCain’s bus and I think that that’s why he lost the election. So, after that he chose Sarah Palin and it all went down hill.

AA:  [laughs] That’s a great touring story, can you think of more? There have to be more awesome stories like that.

DC:  There’s definitely more but we’re really kind of lame. A lot of bands are like, ‘yeah, then we f’ing partied all night’ but I went to bed at 9:30 last night.

AA:  Do you guys bring footballs and stuff?

DC:  We do and I brought a skateboard for this tour which was a blast yesterday and not fun at all today. Get a shot of the ground real quick. [camera pans to unforgiving gravel] That’s why it’s not fun today.

AA:  [laughs] Well, can you skateboard for us anyway, do you have it?

DC:  Oh, you just can’t skateboard on this. It’s too gravely.

AA:  Maybe you can find something.

DC:  We looked all over here today, we were trying this morning.

DC:  Yeah, well even the parking lot’s all torn up.  It’s like hard to board today but yesterday was a blast. But, we brought a football that we haven’t thrown around yet. The good thing about Warped Tour is that we’re learning still, this is our first Warped tour.

AA:  Oh, so this is only your second day of Warped.

DC:  Ever and it’s like the most difficult tour — and it’s commonly known as being the most difficult tour in the world. Most tours are like, you wake up when you’ve done the drive and you don’t load in until 2. Then you know, loading is at 7:30 in the morning. So, we wake up early and you’re in the hot sun all day and there’s a ton of work to do and we can get it all done quicker and have more free time but we’re not good at it yet. We’re not good at setting up everything yet for a festival

AA:  Maybe on the fourth day?

AA: [laughs] Well, what books do you like to read?

DC:  Right now I’m reading Tina Fey’s “Bossy Pants” — I feel like it should be read by like feminists but I think Tina Fey’s awesome. Okay, I f’ing hate movies. I really don’t like them — nah, I shouldn’t say that, I like some movies but I don’t like to watch a whole movie because if I feel like I’ve spent two-and-a-half hours or an hour-and-a-half even just watching one story line then like I haven’t accomplished enough. So, oddly enough then — well, I guess not oddly enough I guess it kind of makes sense — I love television because the story arc is up and down in half an hour and then I can go and get work done.

So, recently I’ve gotten really obsessed with television and this kind of clique in television between like all the people that used to work at “Saturday Night Live” and were part of Second City, Groundlings and “30 Rock” and “Community.” Donald Glover who wrote for “30 Rock” is also on “Community” so I started watching “Community” a lot.  And, he also does this dope hip hop project called Childish Gambino — and then I got really into “Parks and Rec.” because of Amy Poehler and Aubrey Plaza and like you know, “Arrested Development” Will Arnett and Poehler are married. It’s this whole interconnected community of awesome television shows.

“Party Down,” I’ve been really into so I really got excited about Tina Fey’s book. I guess if you want to talk my favorite books, I love Truman Capote’s “In Cold Blood.” I think it is an American masterpiece. It’s one of the best pieces of American literature I’ve ever held in my hand it’s awe-inspiring.

Actually, there’s a movie about his that you can watch about it called “Capote,” about him writing the book. It stars Philip Seymour Hoffman and it’s awesome, you should check it out.