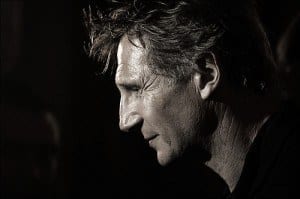 The official Taken 2 has been released, and fans are reminded once again of what a badass Liam Neeson is.  Liam Neeson once again takes on the role of CIA operative Brian Mills in Taken 2.

The Taken 2 trailer opens with Maurad, played by Rade Serbedzija, declaring, “He’s slaughtered our men, our brothers, our sons. We’re going to find him; we’re going to have our revenge.” He then throws dirt into what appears to be a grave

In the wake of the destruction and death Neeson left behind him in the Taken, the remaining members of those killed are out for blood.

Since, Kim, Mills’ daughter, played by Maggie Grace, was taken in the first film, it seems like a poor ploy to have it happen twice. Instead, his ex-wife is the one taken hostage.

Grace’s role does a complete one 180 in the Taken 2 trailer, turning her from hostage to hero, forcing her to utilize her experiences to help save her mother, and Mills must once again use every trick in his bag to rescue his ex-wife.

If the Taken 2 trailer is only half as good as the full version, then fans will certainly not be disappointed by this heat-pounding thriller.

“I’ll finish this thing. You’ll just have to die,” Neeson says in angered, raspy tone at the end.

A release date has yet to be set.