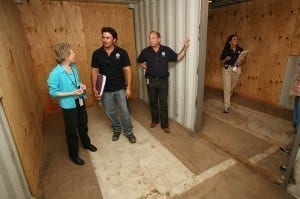 After tornadoes ripped through the Midwest, many are praising their storm shelters, but one Alabama company has been slapped with a restraining order

Storm shelters are trending on Google this week as thousands question whether they are a good investment or a greater danger to those who have them.

In Alabama this week, the Madison County Circuit Court granted a request filed by Attorney General Luther Strange for a temporary restraining order against a northern Alabama storm shelter company.

The complaint alleges that the company violated Alabama’s Deceptive Trade Practices Act with the false guarantee that their shelters exceed FEMA specifications.

The storm shelters, produced by Tornado Masters of Alabama Inc., reportedly sat on inadequate bases, weren’t anchored properly, began to rot and rust within a few months, and had inadequate ventilation.

The storm shelters are often very expensive, ranging from and many consumers struggle to pay for them, but buy them because they want to protect loved ones.

But demand for storm shelters has skyrocketed in Texas. After tornadoes slammed the Midwest this past week, Texas families want to take every step possible to avoid the losses their neighbors to the north have experienced.

Last year, FEMA announced a program that reimburses residents up to $4,000 for a new safe room.

While some companies have misled consumers about the actual level of safety a storm shelter can provide, people who have weathered tornadoes in a shelter may tell you they are glad to have spent the money.

Christopher Smith, of Boaz, Ala., said that is “extremely thankful” he bought one. Smith paid $4,500 for a six-person underground storm shelter in January.

He and his wife found out they were expecting their first child last week, so they were glad to have their storm shelter when severe weather hit the area last week.

Storm shelters can be a good investment if they are built correctly and follow all of FEMA’s specifications, and may save lives in the case of severe weather. But a poorly built storm shelter may do more harm than good.

FEMA 453 is a manual to provide guidance for engineers, architects, building officials, and property owners to design storm shelters and safe rooms in buildings. FEMA encourages the use of experts to apply the methods contained in the manual.