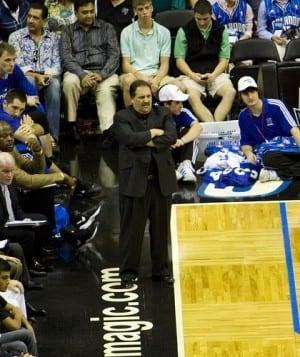 Stan Van Gundy, the winningest coach in Orlando Magic history, will have to search for a job elsewhere as both he and general manager Otis Smith were relieved of their duties with the team on Monday.

It probably wasn’t Stan Van Gundy’s record that resulted in him being ousted as coach, back-to-back first-round exits from the playoffs certainly contributed, but instead his relationship with players, particularly Magic superstar center, Dwight Howard.

Howard, whose contract with the Magic expires next season, has often remarked that Stan Van Gundy’s temperamental coaching style wasn’t helpful to the team. Stan Van Gundy has publicly stated that Howard had asked management to fire him as coach.

Many consider the move to oust both Van Gundy and Smith as a quasi-peace offering to Dwight Howard, who notoriously has asked to be traded from the team year-after-year. But has the organization stepped too far to placate its superstar? Only time will tell, perhaps in a year or two the Magic will be left to survive without the talents of Van Gundy or Dwight Howard.