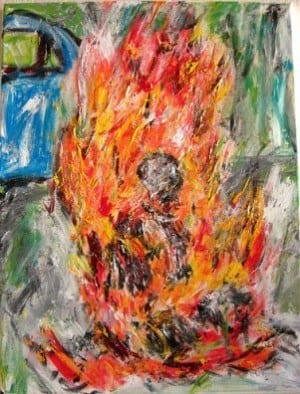 Flames have stoked the political unrest in Chinese-controlled Tibet once again as two self-immolation protests have resulted in the detention of hundreds of Tibetans by Chinese security officials.

A source cited by Radio Free Asia late Wednesday estimated that approximately 600 Tibetans have been detained since the beginning of the protests in Lhasa Sunday; that number cannot be verified though as foreign journalists are barred from entering Tibet.

According to the Chinese state news agency Xinhau, two Tibetan men set themselves ablaze Sunday. One of the men has died.

China has labeled the men as “terrorists” and criminals and the country has laid blame for the incidents on the Dalai Lama, the exiled spiritual leader of Tibet.

According to Tibetan rights groups, at least 35 Tibetans have set themselves on fire in protest since March 2011, of those, at least 27 have died.

The Chinese have controlled Tibet for six decades, sending the Dalai Lama into exile in India in 1959 after a failed uprising.

Deputy party secretary in the Tibet Autonomous Region, Hao Peng, has urged Chinese authorities to clamp down on the Internet and mobile text messaging in an effort to control unrest during the month-long Buddhist festival that started last week.

The Chinese government has said such moves are meant to maintain stability. The official Tibet Daily newspaper reported, “Hao Peng stressed that… the trouble caused by the activities of the Dalai clique has persisted, and the situation for stability maintenance is still complicated and grim.”

According to experts, China may continue to enact tighter restrictions to control unrest in China’s ethnically Tibetan areas.

The Dalai Lama is considered a separatist by the Chinese government. The Dalai Lama disputes this claim, stating that he simply seeks greater autonomy for his Tibetan homeland.