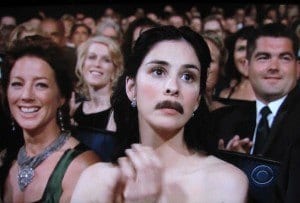 Sarah Silverman will scissor Sheldon down by the sea shore . . . if the Las Vegas casino tycoon, worth an estimated $25 billion, will give the $100 million he pledged to Mitt Romney instead to President Barack Obama.

Sarah Silverman is making an admittedly “indecent proposal” to the billionaire Republican backer, Sheldon Adelson, with the hope of shining light on the political sway a few wealthy donors have in the modern campaign arena.

Silverman’s YouTube video, posted Monday, proposes, “If you give that $100 million to Obama instead of Romney, I will, well, I won’t have sex with you because we’re not married and I’m a nice girl. But, I will scissor you wearing a bikini bottom through to fruition, that means until you, (beep).”

Sarah Silverman then provides a demonstration of the sex act with, of all things, a small dog.

“You’ll be the only elderly billionaire on the block to have traditional lesbian sex through to climax with a girl who had her own show on Comedy Central,” Silverman added.

According to Forbes magazine, Adelson has reportedly already donated $10 million to the pro-Romney Super PAC Restore Our Future and has pledged “limitless” donations in order to defeat President Obama in November’s election.

It’s unlikely that Adelson, who also reportedly bankrolled Newt Gingrigh’s failed primary run to the tune of $20 million, will ever give to the President’s campaign, despite the offer of “traditional lesbian sex.”

Mik Moore, treasurer for the Jewish Council for Education and Research, the pro-Obama PAC behind Silverman’s video, spoke with ABCNews.com about the group’s weariness towards Adelson’s promised pledge, “We’re uncomfortable with the size of the gift, [and] that one person can singlehandedly affect the election.”

As a liberal-leaning political organizer, Moore objects to many of Adelson’s political ideologies. “They are not reflective of the priorities of American Jews, but [his money has] given him a large megaphone for which to amplify his views,” he added.

“Sarah is a comedian. Her priority is doing something funny and attention getting,” Moore said of Silverman’s “indecent proposal.”

According to Forbes magazine, Sheldon Adelson is listed as the eighth wealthiest American.

Neither Sheldon Adelson nor his spokesman have commented on the proposal at this time, and Sarah Silverman’s representative told ABC News that she was “not available for an interview.”

[easy-social-share buttons="facebook,twitter,google,linkedin,stumbleupon,pinterest" counters=0 hide_names="force" fixedwidth="yes" fixedwidth_px="111"]
Previous ArticleSuri Cruise and Katie Holmes get in a car crashNext ArticleUnderstanding How Product Recommendation Engines Work and What It Can Do for You