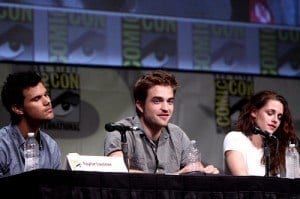 Pattinson, Stewart, and (for some reason) Taylor Lautner will not appear in final “Twilight” conventions.

Robert Pattinson fans planning to stake Kristen Stewart at the upcoming “Twilight” conventions will have to wait for another appearance.

It has been announced that the three stars of the “Twilight” franchise have “opted out” of the film’s final four conventions, which were set to lead up to the final film’s release date, November 16.

It is no surprise to those who have been following the Robert Pattinson and Kristen Stewart drama that broke out last month. Stewart’s affair with her “Snow White and the Huntsman” director Rupert Sanders has brought bad press for both films.

While Kristen Stewart is dealing with blame, shame and general unpleasantness from the press, Robert Pattinson is unhappy with their general plying for answers, according to Zap2it.com. “Media Culture is a monstrous thing,” Pattinson told the LA Times.

Although the press has been on Robert Pattinson’s side, it is obvious from his interviews attempting to rightfully promote his new film “Cosmopolis” that he would rather act as though the situation does not exist. To promote the saga’s final film, “Breaking Dawn: Part 2”, alongside Kristen Stewart, would simply be too uncomfortable for him at this time.

Fans that were planning on attending the final “Twilight” conventions in San Antonio (August 25), Detroit (September 9), Parsippany, New Jersey (October 5) and Los Angeles (November 3) will still look forward to seeing the other films stars, in addition to other “surprises,” according to Zap2it.com

“Although Rob, Kristen and Taylor will not be with us this time out we will have a super line-up of other Twilight stars and the weekend will be filled with special events, movie prop and costume displays, contests, panels, auctions, parties, exclusive merchandise, music and much more, including some surprises,” Creation Entertainment said.

The scandal’s timing is bittersweet. On one hand, it is terrible that Kristen Stewart had an affair right before press for the final film was to go underway, in addition to the press for Robert Pattinson’s other project. However, if Stewart had gone astray earlier in the franchise’s timeline, it could have ended that magical onscreen chemistry that got Stewart and Pattinson started in the first place.