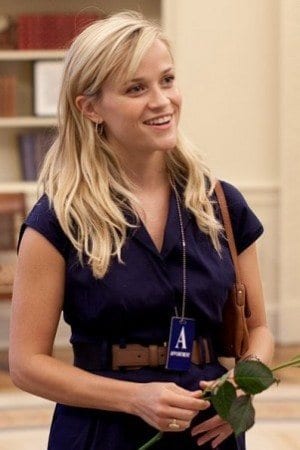 Reese Witherspoon pregnant again reports US Weekly. The Oscar-winning actress is expecting a new baby with husband Jim Toth. However, Reese Witherspoon or Tooth didn’t confirm the pregnancy themselves, but as insiders note, the evidence is becoming clear.

The actress who turned 36-years-old Thursday has been seen out and about sporting a small baby bump. While the bump is miniscule, given Reese Witherspoon’s amazing bikini body, the growing bundle of joy is very evident.

“Her baby bump is still small, but very noticeable,” an onlooker stated to US Weekly. “But she is in great shape — the hike was not that easy!”

Reese Witherspoon has two children already with ex Ryan Phillipe, daughter Ava 12, and son Deacon, 8. This birth will be her first child with Toth.

A friend of the couple told US Weekly, “Reese is right around 12 weeks.” She and her husband “have been trying to get pregnant” since their marriage back in March of last year.

Witherspoon is to star in Mud, a film about two young boys who encounter a fugitive and are determined to help him escape from a Mississippi island. The film is slated to be released later this year.