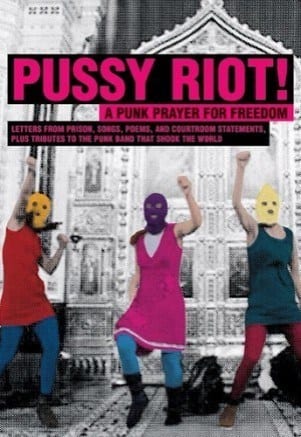 One member of the female punk band walks free on technicality

Pussy Riot member Yekaterina Samutsevich was released from custody and was allowed to walk free from a Moscow courtroom, but her two compadres and fellow bandmates still face a harsh penalty for their protest against President Vladimir Putin. The two remaining Pussy Riot members still being held in custody face being sent to a penal colony for their outspokenness.

The three Pussy Riot women were convicted of hooliganism in August, hooliganism motivated by religious hatred according to the Russian court system, earning each of them two-year prison sentences. Their arrest comes as a result of Putin’s intensifying crackdown on dissent, an attempt to quell religious hatred.

Decked out in neon dresses and balaclavas upon their heads, Pussy Riot performed inside Moscow’s main cathedral, asking the Virgin Mary to save Russia from Putin as he headed into a March election, what would be the leader’s third term if re-elected. What can easily be described as an act of political protest in the United States, brought a flurry of legal troubles for the female punk outfit in Russia.

In court, Pussy Riot argued that their February performance was indeed political, not an attack on religion. The freed woman, Yekaterina Samutsevich, 30, had her sentence suspended because she did not take part in the performance. Rather, she was thrown out of the venue by guards before her guitar even left its case.

Putin believes that the two-year sentences were justified because “it is impermissible to undermine our moral foundations, moral values, to try to destroy the country.”

The fact that Pussy Riot remains in custody thwarts any claim that Putin and the Russian government have to democracy and freedom of expression.

Samutsevich says that she will continue to fight for her two bandmates.

“They are my friends and companions in arms,” she said.