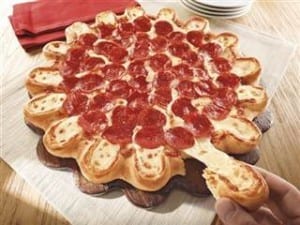 Pizza Hut’s newest addition to its line of cheese-filled products is the Crazy Cheesy Crust pizza. The new pizza features a crust made entirely out of bread pockets filled with melted cheese.

Chef Wiley Bates III is the executive chef of Pizza Hut, and he spent about 16 months developing this new product, according to Yahoo.

The reason behind his idea may seem simple.

The Crazy Cheesy Crust pizza goes on sale today at Pizza Huts around the nation, and it costs $12.99 with one topping. It will feature 16 of the cheese-filled bread pockets, with two pockets per slice. The cheese filling is a five-cheese mix of Asiago, Romano, Fontina, Provolone and mozzarella cheeses.

Bates attended culinary school and worked as a chef in high-end restaurants and hotels before landing the Pizza Hut position.

“Fine dining or otherwise, the application is still the same,” he said. “I am still trying to make that customer excited and happy.”

The new pizza contains 390 calories and 20 grams of fat per slice.

The pizza looks similar to the Crown Crust pizza which the company released solely in the Middle East. It features a pizza surrounded by mini-cheeseburgers. Pizza Hut has also released pizzas in Japan and Thailand will hot dog-stuffed crusts, according to NBC.

The Crazy Cheesy Crust pizza was developed solely for the American market.