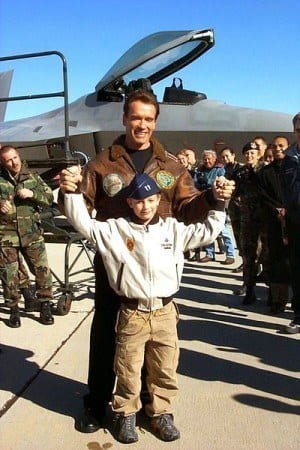 Patrick Schwarzenegger, the one son Arnold Schwarzenegger had with Maria Shriver, suffered a skiing accident this past weekend but has already returned to the slopes.

The 18-year-old posted an image of himself via Twitter on a gurney with a neck brace and breathing bag. He posted another image of a large gash along his back and posted, “living the hurt lifestyle.”

Patrick Schwarzenegger was quick to let fans know that he was just fine, “Appreciate all the messages,” Schwarzenegger wrote on his Twitter. “I’m actually feeling really good today, and I even went skiing again today.” He later even retweeted a message, “Happy to hear @pschwarzenegger is doing fine and back on the slopes #badass.”

Patrick Schwarzenegger changed his Twitter name to Patrick Shriver last summer causing some to speculate that he did this due to his father, the former California governor’s affair and love child which he hid from his family for so long.

Maria Shriver is best known as a journalist and author of six best-selling books. She has a Peabody Award and an Emmy and is even part of the Kennedy family. Arnold Schwarzenegger is best known as former Mr. Universe, an actor in films like Terminator and sure the governator of CALI-fornya.

Page Six has reported earlier this month that Arnold Schwarzenegger and Maria Shriver have began couple’s counseling in attempts to save their 25-year marriage. But for now, the two are surely grateful their son has fully recovered.