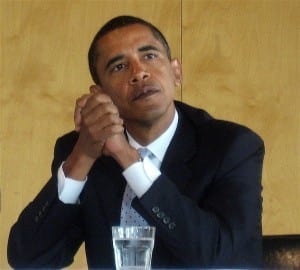 “In the new poll, 46 percent approve of the way Mr. Obama is handling his job, while 50 percent disapprove. That’s a mirror image of his 50 to 46 positive split in early February,” said the latest opinion poll released by The Washington Post.

The New York Times reported last month that Obama’s approval rating was at 50 percent last last month but now “sinks to a new low.” The paper went on to say that a lot of this has to do with high gas prices.

With the rumors of war in the Middle East and Iran postulating a nuclear program that could potentially halt a significant amount of the oil supply, Barack Obama commented on the current situation, “Understandably people are frustrated when gas prices are going up, and there are things we can do, but they’re not going to result, provide results overnight,” Telling CBS Pittsburgh, “Which is part of the reason I said a couple weeks ago let’s stop with the loose talk about war. Because a lot of what’s driving this is people’s concern and fear that there might be major disruptions in the Middle East oil markets,” Mr. Obama said.

Gasoline consumption is reported to be down 7 percent with consumers adjusting their spending patterns, Obama’s approval rating needs a quick pick-me-up if he wants to win back votes.