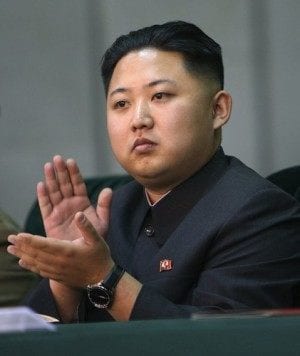 The first lady of N. Korea steps out for the first time in two months to a world of speculation

North Korea pregnancy rumors are spreading fast after the first lady, Ri Sol Ju, wife of young leader Kim Jong Un, stepped out in public for the first time in two months in a large coat that could hide a baby bump. This is little to speculate on, but the world has jumped at the rumors surrounding the leaders of the world’s most reclusive nation. The lady in question is saying nothing.

The pregnancy rumors surrounding the North Korea first lady started when KCNA news agency of North Korea released a photo of Ri stepping out Monday for a football match and musical concert with her husband. Kim Jong Un and his wife have made frequent public appearances together, a stark contrast to the leader’s father Kim Jong Il, who rarely appeared in public with any of his wives.

This is the first time since the two married sometime earlier this year that Ri has been absent from the public eye for so long. A possible pregnancy for the leaders of North Korea was part of the rumors, but it has also been speculated that Ri was possibly held on house arrest after state elders chastised her for cheerful behavior in public.

The rumors surrounding the first lady’s pregnancy have been widely circulated throughout the world, much more so that in North Korea.

Kim Jong Un and Ri Sol Ju were confirmed married this past July after they were seen together in public multiple times.