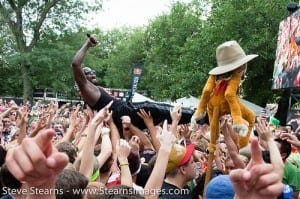 Ah, Labor Day weekend, that time of year where dreadlocked, tie dyed, neon clad and ironic eyeglasses-wearing individuals all pile onto the green line of Chicago’s “L” train and head over to North Coast Music Festival. Now on its fourth year, the festival once again made its way into Union Park for a whimsical three days where people survive on good vibes, music and vendor food.

This year started off with a bang literally. My arrival was met with plenty of confused looking festival goers standing on the corner and ominous clouds hanging over the fest. North Coast Music Festival had been evacuated and sure enough the storm came and took Passion Pit’s equipment with them, prompting the live electronic band to reduce their show to a DJ set. However, the show still went on for Mac Miller who performed a couple songs from his mixtape Kids and his album Watching Movies with the Sound Off. He took a break from his album to give his offerings to the Based God  by playing Lil B’s “I’m God” and rapping along to it, giving me a flashback of when Lil B performed at that very same stage a few weeks earlier at Pitchfork Music Festival.

The highlight of the night was definitely legendary producer Just Blaze’s set who was at the small Dos Equis stage even though he was way more deserving of the bigger stage. Just Blaze is responsible for producing classic songs by Jay Z, Memphis Bleek, Joe Budden and many others while turning up the Dos Equis stage to full energy when he went through songs like Joe Budden’s “Pump it Up” and Kanye West’s “Touch the Sky”, which was a breath of fresh air from the constant trap sets that were taking over the Dos Equis stage that day.

Day two came quickly and rain free, with the acid-rap group Flatbush Zombies. Their crude lyrics and warped productions thumped into the grounds of the Last Stand Stage. Things got eerie when audio of the 9-11 call of the Miami face eating zombie was heard before the group broke into their ASAP Mob collaboration, “Bath Salts.” After Flatbush Zombie’s set, British DJ/production duo Bondax hit the decks for an eclectic set that gave off a Disclosure/Hot Chip vibe with their own penetrating bass pounds and stabbing piano chords. Their neon background visuals acted as a time machine that took the whole crowd to the 80’s. Big Gigantic ended the night at the Coast Stage with their signature live dubstep set, with their instruments adding a nice touch to the thick dubstep wobbles that sent shockwaves through the crowd.

The last day of NCMF arrived with by far the most people in attendance this day, obviously to see the eminent hip hop group Wu Tang Clan hit the Coast Stage. I have never seen so much Wu Tang Clan apparel in my life, even spotting a little baby with the famous yellow and black “W” displayed across its onesie. Before Wu Tang, moshpits broke out at Datsik’s heavy dubstep set, which brought me back to the classic sounds of UK dubstep, rather than the annoying car alarm sounds of the Skrillex dubstep trend. Rock/Reggae hybrid group Rebelution calmed everyone down with a euphoric set at the North Stage that brought the good vibes of some reggae with a nice sound that is similar to that of Matisyahu’s. Purity Ring hit the same stage once night fell and put the packed stage in a trance with Corrin Roddick’s sensually creepy production meshing perfectly with Megan’s angelic voice. Their famous lighting cocoon stage set up synchronized perfectly to Corrin’s live mixing, making the experience even more ethereal.

As a cloud of suspicious smoke rose above the Coast stage and chants of “Wu Tang” and “Wu Tang Clan ain’t nothin’ to fuck with” took over Union Park, it was time for the highlight of the weekend. RZA, GZA, Method Man, Raekwon, Ghostface Killah, Inspectah Deck, U-God and Mastah Killah burst onto the stage breaking out into “Bring da Ruckus” prompting everyone to start dancing and rapping along, including the previously stoic-faced security posted up at the front of the stage. Wu Tang Clan brought the same energy that they would have a decade ago and went through everyone’s favorites including “C.R.E.A.M” and of course “Wu Tang Clan Ain’t Nuthing ta F With.”

A bittersweet moment was the group’s dedication to Ol’ Dirty Bastard, as they prompted the hyped crowd to chant his name over and over again in memory of the deceased member. Weather took over again when Ghostface Killah’s microphone cut out and audio saying “The National Weather Service has informed us that a storm will be headed here in thirty minutes. We need you to evacuate the park immediately.” Wu Tang’s set was cut 15 minutes short and festies piled onto the green line only to see what North Coast Music Festival 2014 has in store for them.