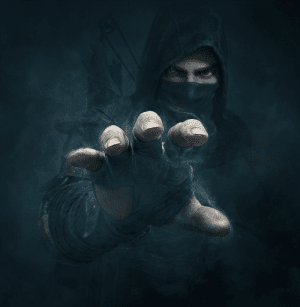 There’s a reason the game is called Thief and not Assassin, or killer, or anything else that would insinuate that the combat would be halfway worth a damn. And from the onset of the game, the first cutscene, you’re presented with a clear directive of what to do with enemies during your heists: don’t kill them. Playing as the master thief Garrett during what should be a typical job, you’re accompanied by the talented upstart Erin, a youngster of reputable skill. Where Garrett is calculated and nonlethal, Erin is a loose canon.

Erin has no regard for safety, including her own. She steals without remorse and it’s clear after only a few seconds that Erin’s only real goal is to be compared to Garrett himself. Of course, with envy comes jealousy, and that jealousy makes Erin careless.

That jealousy gets Erin killed.

Suddenly, a year after that you’re returned to the city with no memory of what’s happened since the night when the attempted theft went sour. Old friends are happy to see you, but most people aren’t doing so well. You’re alive, of course, but the Gloom is wiping people out by the hundreds. A plague-like disease, the Gloom appeared shortly after you disappeared and has ravaged the population. The poor are the ones who suffer most, but nobility isn’t immune, making the Gloom a far more dangerous adversary than Garrett himself.

As you attempt to piece together the period of time you were away — a hole in your razor sharp memory — you’re forced to take a stable of thievery missions that range from petty burglary to well-planned and expertly executed heists. Some of these are used to build your bank account for upgrades, while others are used to advance the plot and fill another piece of the jigsaw puzzle.

The city is a living breathing organism itself. Even when you notice the deficiencies of the game, seeing how the city reacts to Garrett is quite impressive. Guards, the very bastards you have to dispatch, even when you’re not in the act of thievery, will have conversations that often offer clues to Garrett. Random conversations are struck from behind closed windows that will direct him to hidden riches, but many take grim tones, a constant reminder of the dismay that hangs over the city like a festering cloud.

A strange thing happens though, for those who play Thief with no expectations of dazzling combat or swashbuckling heroes: you’ll start to like it. The city itself acts as a hub of sorts, with missions all branching off from within. If you’re not actively engaging in a mission, you’re free to traverse as you see fit. Guards stick to the streets, so you’re best option is to scale the walls and look down from on high. Running from rooftop to rooftop is easier in some places more than others, with paths sometimes laid out perfectly for efficient travel.

For those places where the path isn’t exactly simple, your arrows are your friends. See, your arrows aren’t necessarily your weapons. In fact, your arrows are more of a tool than actual weapons. Rope arrows for instance, when fired into overtly marked beams, will drop a climbable rope that allows Garrett to access new areas, grants access to hidden areas, or presents new paths during missions, most often to prevent combat. Choke arrows will disable birds or dogs that will alert any nearby guards to your presence. Water arrows snuff out flames. There’s a pretty impressive array of options when selecting your arrows, including some specifically designed for combat. It’s those that you’ll find yourself saving, using them from the shadows to dispatch one last guard who happens to be patrolling the area that you’re trying to move through.

Character progression of the game is focused on Garrett’s skills and the tools he uses. Focus Upgrades help hone Garrett’s thieving skills, like making him more dexterous or enhancing his ability to detect noises. Most are very well balanced and grant significant benefit, but don’t offer anything unrealistic. Others, namely Intuition and Stealth, offer a semi-supernatural feel to them, while still residing in the realm of believable.

Garrett’s tools are plentiful, as expected. How would you suggest stealing a priceless painting, after all? The  razor is perfect for it. Garrett isn’t some uncivilized barbarian after all. Besides, people pay more for undamaged wares. Wirecutters help disarm traps and the wrench acts similar to the rope arrows, only for on the ground. Loosening bolts will uncover secret areas or open additional pathways throughout the city.

Finally, Garrett’s collection of trinkets actually do offer benefits that aren’t easily explained. The Lucky Coin increases your focus for instance, the essence behind your “Thief Vision,” an ability to see and hear specific things in the environment. The Moss Quiver, another trinket, turns a particular pair of arrows into noiseless killing options. These are two of the least powerful trinkets available, which means they’re also the least expensive.

While all these options exist to help players along in order to make later confrontations easier to handle, Thief isn’t without its flaws. There are hiccups within the audio that sometimes cause unexpected noises to be heard. They sound distorted and clearly not part of the game itself. Other times the characters lip movements are grossly delayed compared to the audio being recorded, causing players to focus on nothing else during those moments and distracting from an otherwise beautiful game.

One particular error in the game cost me around 3 hours of gameplay. While the game often leaves three or more paths for players to take in order to accomplish their tasks, in one particular instance you’ll be greeted with one way out. Only one. It’s at this moment when the ropes I needed to climb out of the hole I was in refused to appear. Which just so happens to be the end of that particular level.

Locomotion is generally handled well too, as mentioned with the rooftop pathways being fairly clear of debris. Unfortunately, unless you’re extremely careful when on the rooftops, Garrett will easily fall, without warning, into the midst of patrolling guards causing you to do one of two things: run or reload your last save. It was such a common occurrence that “Run or Reload,” will become somewhat a of a mantra for anybody who gets deep into the game.

The most masterful thing that Thief does is by living up to its name. Garrett is indeed a thief of renown, but you are not. Pulling off a heist here or there will certainly develop your legacy, but to become the thief that Garrett is known to be takes skill. That’s why, littered throughout the city, are dozens and dozens of trinkets to collect. As you move through rooms, complete missions, or simply explore your city, you’ll be stealing picture frames, necklaces, brooches, even silverware — if it holds value, of course. And instead of actually having to fence the items, they’re immediately turned into gold for your purse.

That’s not even the best part.

Because you’re constantly stealing, you actually begin to feel like the thief that Garrett is. In spite of your nimble fingers though, you’re never too rich. Granted, you’ll probably never want for money if you’re trying to stock your arrows or other consumables, but you aren’t lavishing in luxury until after the game ends and you begin dabbling in the challenge modes, of which there are three scenarios.

Truly, no game quite lives up to it’s name like Thief. If your scenario degrades to the point where you’re battling hand-to-hand with more than one guard, you’re probably going to lose. Unless you run or reload, that is. However, if you’re calculated, take your time, study your surroundings, and move cautiously, you’ll get to enjoy a true-stealth game that allows you to finish it without killing a single person.

Previous ArticleReview: 311 come back strong with “Stereolithic”Next ArticleSouth Park weaves an epic tale where you strive to become King Douchebag in the Stick of Truth