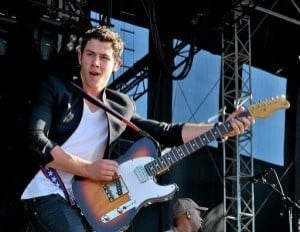 Following the shocking disbandment of the Jonas Brothers last fall, Nick Jonas is ready to move on. The youngest of the trio released his single, “Chains” on Thursday, a preview of his solo forthcoming album.

“Chains” is an intriguing track that is unlike any of the Jonas Brothers’ past work and succeedingly moves him to an adult position with its R&B aesthetic and smooth vocals.

The song produced by Jason Evigan is the lead single off of Jonas’ untitled album from Island Records and the first new music to be released since the brothers split.

This isn’t the first solo project from Nick Jonas, during the band’s 2009-2011 hiatus, Nick Jonas & The Administration released their 2010 album, Who I Am.

A release date for the full-length album has yet to be announced but you can check out his latest single, “Chains” here.

[easy-social-share buttons="facebook,twitter,google,linkedin,stumbleupon,pinterest" counters=0 hide_names="force" fixedwidth="yes" fixedwidth_px="111"]
Previous ArticleMicrosoft Partners Up with China Telecom to Sell Xbox One in ChinaNext ArticleAria Stark Actress Begins Talks About Starring in The Last of Us Film