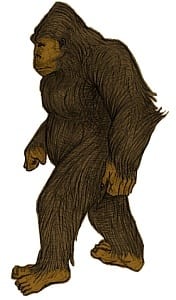 In an attempt to create a Bigfoot hoax, Montana native Randy Lee Tenley was fatally struck by two vehicles on Highway 93 Sunday night.

Tenley was dressed in a Ghillie suit which is camouflage designed to resemble the ground and trees. The suit is typically worn by military members to camouflage snipers in combat.

State trooper, Jim Schneider, said “He probably would not have been very easy to see at all.”

Randy Lee Tenley made the fatal mistake of stepping out onto the busy highway at night wearing this camouflaged suit. Surprisingly enough, alcohol may have been an influence on the man’s decision to create the Bigfoot hoax.

In Tenley’s attempts to create sightings of the fabricated creature, he was tragically struck by a 15-year-old girl followed by another vehicle driven by a 17-year-old.

Schneider also said that Randy Lee Tenley was “well into the driving lane” causing the man, or Bigfoot, to be hit by the two cars.

Unfortunately for Tenley, his plans to imitate the mythical beast fell through. Authorities did not receive any calls from highway drivers thinking they had seen Bigfoot.

Montana Highway Patrol District 6 officials could not be reached for comment.