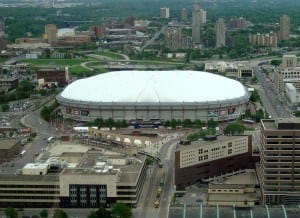 After constructing a new plan, supporters of the Vikings new stadium have to now convince lawmakers.

The Minnesota Vikings are steps closer to get a stadium that they have been waiting on for nearly ten years.

Governor Mark Dayton and Vikings owners Mark and Zygi Wilf announced plans for a brand-new, $975 million stadium to be built where the Metrodome sits at now in downtown Minneapolis. This step brings them closer to showing the plan to state lawmakers for approval.

Minneapolis mayor R.T. Rybak said, “Every single politican is now going to have to make a tough decision. Rybak will now have to convince city council members that money collected from sales tax should be used towards the projects.

According to Al.com, 201 state lawmakers are up for reelection this year and many of them don’t feel like using $737 million in public money to use for funding.
Senator Jeff Hayden said, “I can’t see a way for me to vote for it. My constituents have weighed in consistently that they do not want public financing of private stadiums.”

Supporters of the plan claim that the stadium will not only benefit the Vikings but the whole state of Minnesota. The plan calls for the team only keeping profit made during football games and allowing the stadium to be a “public entity” for other sporting events, concerts etc.

The NFL would also have to approve this stadium deal due to part of the Vikings money coming from a league funding program set up to help build new facilities around the NFL.
Dayton, who has been supporting this project for months, has referred to the stadium as the “people’s stadium,” insisting that the stadium will have multiple uses like high school and college sports tournaments and hosting national occasions like the Super Bowl.

The governor says that the new stadium could provide 8,000 construction jobs, 5,000 supplier jobs and 2,000 permanent jobs. If the plan gets approved, the stadium might be open as 2016, with the Vikings relocating for one season.