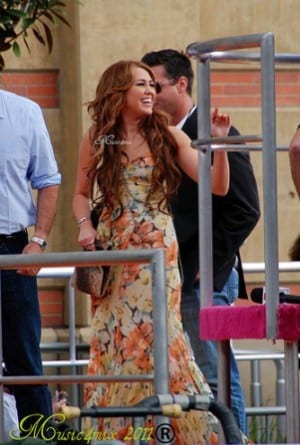 Miley Cyrus, well-known twerker and Disney Channel star gone bad, has been spotted with her fiancé Liam Hemsworth in Hollywood for the first time in 5 months. There has been speculation that the two split after Cyrus has been seen without wearing her engagement ring while Hemsworth was in Australia filming the Hunger Games. Cyrus went on Twitter to deny the rumors and confirm that the wedding has not been called off.

Cyrus has been getting a lot of media attention lately, specifically for her party animal image and I don’t give a f**k attitude. The former Disney Channel Star has ditched her sweet and innocent Hannah Montana character and has shown the world she is a grown woman who doesn’t care what the media thinks of her.

Earlier this week, Cyrus released her new music video titled We Can’t Stop. The video quickly started trending and had 14 million hits within two days. People have been wondering lately what has happened to the former innocent Disney Channel Star because in the video Miley seems to have….well lost it.

In her video, Cyrus can be seen twerking multiple times and in all types of angles, dancing with teddy bears, making out with a doll in a pool, dirty dancing in a bathtub and wearing scantily clad, tight clothing. Although parents and others want her to stay a good girl and positive role model to their children, Cyrus has hinted a few times in the past that she likes to have fun and do whatever she wants.

The first time Cyrus really raised eyebrows is when she posed topless at a photo-shoot when she was 15. Although she had a blanket covering her front end, it still sparked controversy that it was an inappropriate thing for a teenager to do. She later created more fury with parents when she “pole danced” at the Nickelodeon Kids Choice Awards in 2009. Even though all she really did was shimmy down while holding onto a pole on top of an ice cream truck, she was criticized for her behavior at a show for kids. Then in 2010, she was captured on video smoking salvia in a bong. At that point, it was concluded that we have lost our sweet Cyrus forever.

Although Cyrus is a party girl and enjoys twerking, she isn’t harming anyone. She’s living her own life and it’s about time everyone else did the same. She didn’t get pregnant as a teenager, she isn’t addicted to drugs or alcohol and she hasn’t been arrested or charged with anything, so as of now she’s in the clear. Compared to Lindsey Lohan, she pretty much is an angel.