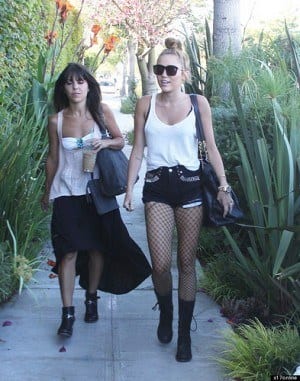 Details about Cyrus’ guest appearance on ‘Two and A Half Men’

Miley Cyrus will grace the small screen once again with a guest appearance on Two and A Half Men, and pictures have surfaced of Cyrus’ character and Walden (Kutcher) in bed. It’s not what it looks like, they swear.

Although Miley Cyrus is seen scantily clad in stills from her upcoming Oct. 17 guest spot on the controversial show with Kutcher, sources from the show have given fans a few clues on her character’s place in the sitcom.

Rather than portraying a romantic interest for Kutcher, Miley Cyrus will be playing Missi, the daughter of one of Walden’s friends, according to Glamour.com. Missi, rather than striking up a relationship with Kutcher’s character, will actually stand to make Walden feel old, not young and in love.

On another note, Miley Cyrus’ appearance will spark some romantic interest for Jake Harper, played by Angus T. Jones. Jake will be returning home from the army to visit his dad Alan Harper, played by Emmy award winner Jon Cryer.

Despite the lack of romantic link between Miley Cyrus and Ashton Kutcher’s characters, her Oct. 17 guest appearance is sure to shake things up for the guys of Two and A Half Men.