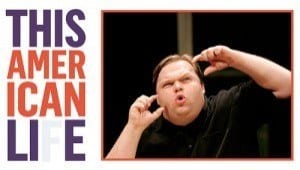 What creative writer hasn’t used a little exaggeration and embellishment to get his point across? Just ask Mike Daisey.

Last week the radio show This American Life retracted a segment on the show of Mike Daisey’s The Agony and Ecstasy of Steve Jobs. The follow up broadcast of the show, hosted by Ira Glass, told of aspects of Mike Daisey’s recounts of his trip to Shenzhen, China as being fabricated.

The Agony and Ecstasy of Steve Jobs, according to the public theatre website,
“Mike Daisey turns his razor-sharp wit to America’s most mysterious technology icon in this hilarious and harrowing tale of pride, beauty, lust, and industrial design. He illuminates how the former CEO of Apple and his obsessions shape our lives, while sharing stories of his own travels to China to investigate the factories where millions toil to make iPhones and iPods. Daisey’s dangerous journey shines a light on our love affair with our devices and the human cost of creating them.”

Even Apple audits and other journalist have confirmed the working conditions of Apple factories to have had serious injuries and underage workers, but it seems Daisey crossed a line. He recounted of interviews that never happened and incidents that did not occur. Now, Mike Daisey is being smeared on the media as a phony.

“If people want to use me as an excuse to return to denialism about the state of our manufacturing, about the shape of our world, they are doing that to themselves,” Daisey stated. He admits to embellishing the story and apologized for it but still believes he stands for truth, “I told Ira that story should always be subordinate to the truth, and I still believe that. Sometimes I fall short of that goal, but I will never stop trying to achieve it.”