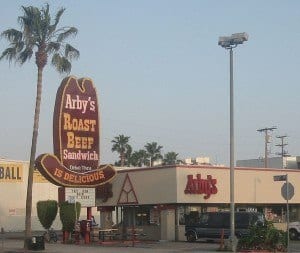 Ryan Hart had 11 fingers for a moment – not that uncommon, of course, except that the eleventh was not on his hands but in his sandwich.

The Michigan teen took a bite of a junior roast beef sandwich at a Jackson County Arby’s when he bit down on something that tasted like rubber to him. It wasn’t rubber; it wasn’t roast beef. It was the inch-long remnant of a worker’s finger.

Ryan Hart, 14, and his mother, Jamie Vail, along with Hart’s 11-year-old brother and Vail’s friend, Joe Wheaton, had gone through the drive-thru of the Arby’s restaurant. Everything seemed in order until Hart exclaimed that he had found a piece of a finger in his sandwich.

Vail at first thought he was joking but quickly realized the severity of the situation. She dialed 911 before meeting police at an area hospital. Hart had his blood drawn at the hospital and was prescribed medication.

“I was like, ‘That (has) to be a finger. I was about to puke. . . . It was just nasty,” Hart told the Jackson Citizen Patriot on Wednesday.

The severed digit belonged to an employee of the restaurant who had been working at a meat slicer where she cut herself and left her station without telling anyone about the incident, according to Steve Hall, the environmental health director for the Jackson County health department. According to Hall, the woman’s co-workers continued to fill orders until they found out what had happened. At that time, they shut down food production and cleaned and sanitized the restaurant thoroughly.

“Somebody loses a finger, and you keep sending food out the window? I can’t believe that,” said Vail.

John Gray, a spokesman for Arby’s, made a statement on Wednesday, in which he apologized for what he called an isolated and “unfortunate incident.” According to Hall, Arby’s is investigating the incident and has fully cooperated with health officials.

Vail said she has contacted a lawyer but has not yet determined whether or not to take legal action against the Atlanta-based chain.