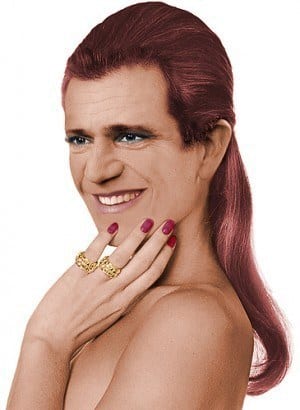 What is it this time, jews, women, both?

Mel Gibson has been in the media more for personal issues than for his career in recent years. Here comes yet another example.

Joe Eszterhas published a nine-page letter through The Wrap on April 11 claiming the Braveheart actor was engaging in anti-Semitic, sexist and hate-filled speech. He claimed to have proof against the allegations and has now brought that evidence to light. Eszterhas posted a recording to The Wrap of Mel Gibson. The recording was made by his frightened 15-year-old son while he was over at the Gibson residence in Costa Rica on Dec.7, 2011.

In the audio clip below you can hear the enraged Gibson talking about his wife Oksana Grigorieva. “I’m earning money for a filthy little c***sucker who takes advantage of me!” Amongst many other vicious comments, the Lethal Weapon star seems to scream incoherently at times.

Mel Gibson was diagnosed with severe bipolar disorder and rage issues during his custody battle with his wife years ago. One source said, “It’s clear to me from listening to the recently released tapes that he most likely isn’t taking his medication, which is sad because when he was taking it he was so much calmer and rational.”

In the explicit audio released in 2010, Gibson was heard in a voicemail on Gregorieva’s cellphone calling her a “f***ing slut” and said the f-word 23 times in two minutes.

“The bottom line is it shows to me he badly needs help … My interest isn’t to damage him with this tape but to prevent damage being done to others, starting with Jews, including Oksana and now, I’m sure, me. I strongly believe that unless he seeks and receives some kind of psychiatric help, someone is going to get hurt,” Eszterhas told The Wrap.

Gibson is now seeking a way to sue Eszterhas under Costan Rican law that his “basic human right” was violated while being recorded in the privacy of his home.