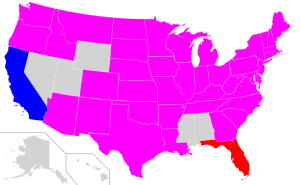 The Mega Millions soared past $220 million for the second time in two months. Tuesday’s drawing ruffled a few feathers though with 68 tickets missing the Mega Ball number.

As ironic as it may sound, California residents sadly had the most winning Mega Millions tickets at 21. Though, since the state doesn’t have a Mega Millions Ball either and under their pari-mutuel system, the winnings were split up, and ticket holders only received $56,382.

If you are thinking about playing the Mega Millions anytime soon, remember that your odds are 1 in 175,711,536. Suddenly, Vegas odds seem pretty good.