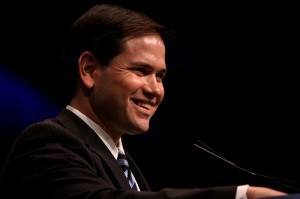 Marco Rubio took the stage Aug. 30 at the Republican National Convention to introduce the GOP candidate Mitt Romney. His speech, which pleased the crowd in Tampa Bay, resonated with the Republican theme of American exceptionalism.

As senator of Florida, Marco Rubio was chosen to introduce Romney, and he did so with stories of his family and the American dream. Much like Governor Christie did in his keynote address, Rubio opened his speech by relating the values of his Cuban-American family to the values of the GOP.

The senator told the crowd what his grandfather, who came to America from Cuba, told him as a young boy, and how he believed that because Marco Rubio was American, any of Rubio’s dreams had the possibility to come to fruition.

“The dreams he had when he was young became impossible to achieve, but there was no limit to how far I could go, because I was an American,” said Rubio.

Marco Rubio digressed at the podium that what makes Mitt Romney the best choice for President is his awareness of the fact that America is made of those who achieve the American dream.

“It happened because our people used their own money to open a business. And when they succeed, they hire more people, who then invest or spend their money in the economy, helping others start a business and create jobs,” said Rubio of America’s prosperity.

Rubio points the finger at President Barack Obama for America’s recent failure to keep that past prosperity. The senator stated in his speech that Obama did not keep his promises to help the economy, and as a result those who believed in him are stuck in dream world.

Marco Rubio believes Mitt Romney can change that, and as his speech came to an end he asserted his belief in Romney as the Republican presidential candidate.

“We chose a special man to lead us in a special time. We chose Mitt Romney to lead our nation. And because we did, the American Miracle lived on for another generation to inherit,” said Rubio in his final words.