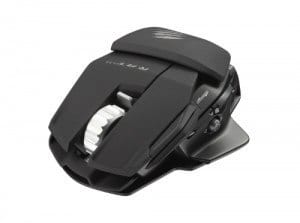 Mad Catz has released a torrent of gaming peripherals in recent months and, with the enormous push of wireless and gaming laptops, would be remiss not to cater to a cordless audience. That’s why, using the design of their popular MMO Gaming Mouse, they’ve released a more succinct wireless version, dubbed the R.A.T. M. Despite being a smaller, more mobile version of MMO series of gaming mouse, does the RAT M deliver enough options to justify its $129.99 retail price? Yes. It does.

The design is reminiscent of the previously discussed MMO series of gaming mouse, but one caveat is that the palm rest is extendable, meaning those with smaller (or larger) hands will find that it fits nicely. With no hardware to hot-swap in and out, the simplicity is pronounced. There are 10 programmable buttons, five of which appear on the 5D button, which has transitioned from Mad Catz’s other gaming mouse options. The mouse itself can track up to 6,400dpi, easily adjustable on the top of the mouse to allow for smooth transition during games when quick, reactive movement is necessary.

It also features a wireless dongle that is inserted into the mouse itself when not in use, allowing for easy storage and reduces the risk of losing the tiny USB-plugin. For those who would rather take advantage of Bluetooth, that option is included as well, though how it affects the two AA batteries needed to run the mouse is not entirely clear. What is clear, and frankly quite surprising, is the claim that the AA batteries will last a year before they need to be replaced. Testing the mouse by leaving it on overnight, connected to both bluetooth and the USB dongle, for approximately two months showed no signs of battery drainage as far as performance was concerned. Whether it lasts the full 12 months remains to be seen, but the results thus far are impressive.

Those who have fallen into the world of gaming certainly understand the importance of a useful mouse. The R.A.T. M delivers the comfort, ease of use, simple installation, long battery life, portability, and customization needed to perfect whatever game you’re currently playing. Beyond that though, is a simple truth: even non-gamers will enjoy using this mouse. Beyond the Transformer-like design, users can easily take advantage of 2, 4, 6, or all 10 of the buttons to create an experience engineered specifically for the task at hand. From video editing to Photoshop, browsing through College News or Youtube, the R.A.T. M is a wonderful piece of hardware that is durable and useful. If you’re shopping for a new wireless/Bluetooth mouse, look no further.