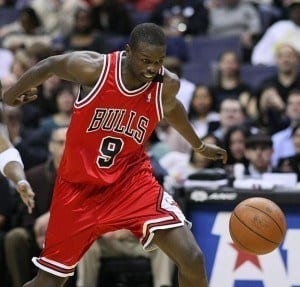 Joining teammate Derrick Rose, Luol Deng will be playing in the Feb.26 game as a reserve.

In what seems to be long over-due recognition, Luol Deng was named as an All-Star reserve Thursday.

A product of Duke, Deng has been in the league eight years and has been the Bulls’ most consistent scorer, excluding MVP Derrick Rose. Since the 2006-2007 season, Deng has averaged almost 17 points a game.

Defense is Deng’s strongest suit and leads the Bulls with one of the best top defensive units in the NBA. Last year, he was 10th in the Defensive Player of the Year Award.

Coach Tom Thibodea said about his player, “He has great length and body control. He challenges shots, keeps the ball in front. He’s a very good individual defender and excellent team defender.”

Deng was born in Sudan, but grew up in England, marks history for being the first Briton to play in an NBA All-Star game.

For the first time since the 1997 season, two players from the Chicago Bulls will be going to the Feb. 26 game.

Coaches got to select the reserves and had to pick two forwards, two guards, a center and two additional players. They could not vote for one of their own.